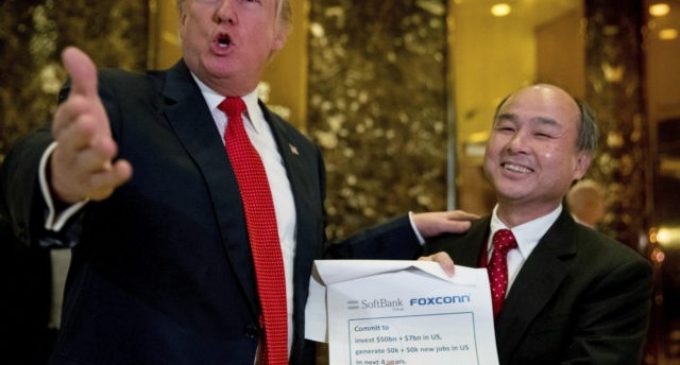 While liberals continue to whine and complain about Donald Trump being elected president and waste mass amounts of money on worthless petitions and recounting votes, Trump isn't staying idle in his pre-White House motions. Unlike President Obama and his administration, Trump is looking to bring jobs back to America and save an economy that our current administration would have you believe was just fine. After all, anybody can fudge numbers.

Trump, on the other hand, is looking to make a real difference, as demonstrated by his meeting with SoftBank Group Corp. founder and Chief Executive Officer Masayoshi Son, who agreed to invest up to $50 billion dollars in the United States, which includes a plan to create 50,000 new jobs.

While we might never know what went on behind those closed doors, when both men emerged and the cameras started flashing, both looked to be satisifed in one way or another. And what Masayoshi is getting out of this deal is currently unclear, but for right now, Americans should be grateful.