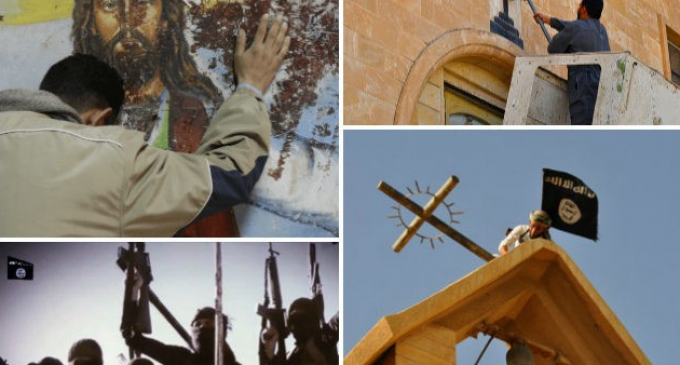 Persuading Christians to join ISIS is the aim of the article “Break the Cross” in the Islamic State magazine Dabiq.  The main point is to convince Christians that Jesus is not the Son of God, but merely a prophet, nor did He die on the cross and that He is a slave of Allah.

According to the article, the New Testament is a perversion of God's message, and therefore Christianity is a pagan religion based on a fake Jesus.  The Q'uran, of course, has the true story of Jesus, the true prophet of Islam.

The editors of the magazine state that reason for the issue is to “help Crusaders read into why Muslims hate and fight them, why pagan Christians should break their crosses, why liberalist secularists should return , to the fitrah (natural disposition), and why skeptical atheists should recognize their Creator and submit to Him.”

This “help” of course is at the edge of the sword, through rape, slavery, torture and crucifixion, but the Islamic State “means well”, in bringing about perfect worship of Allah through the whole world.

The perversion of the Gospel of Jesus Christ by Islam is blasphemy.  Much like a cult that takes the parts of the Bible they like, while twisting their own human philosophies into the fabric of the truth, Islam has done the same, by commandeering the Old and New Testaments and placing Mohammad into the narrative.

Read on page two the twisted doctrine the Islamic State is teaching its converts.