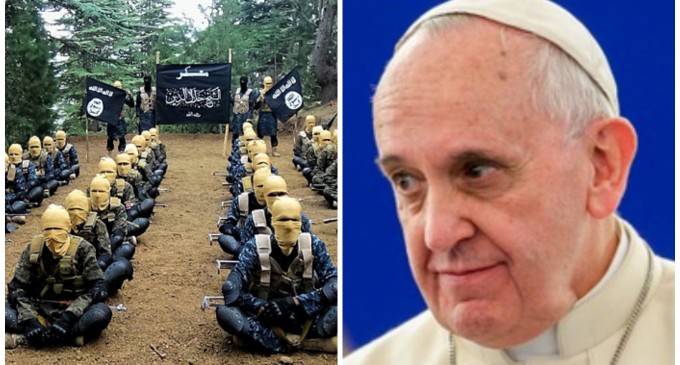 Pope Francis recently spoke about Islam and claimed that the violence it is launching throughout the world via Islamic State is simply a frustration and an economic statement of inequality and a condemnation of the greed of other nations.

He then claimed that violence exists in all cultures and cited street crime and domestic violence that he reads about in the newspaper and he then equated it to the beheadings and the blowing up of innocents in stadiums as some kind of moral equivalence. It is hard to imagine that the Pope could be so logically impaired.

There were may public responses to Francis' confused and preposterous message, and certainly no other religious group has in even a tiny way replicated what the Muslim jihadis are doing. But it turns out that the best response is provided by Islam itself in the Muslim propaganda magazine Dabiq, which takes pride in the slaughter and bloodshed Islam has unleashed around the globe. The author states categorically that the slaughter will continue until there is total annihilation of everyone who does not totally submit to the murderous savages.

The pope really needs to read the article, it is shocking and terrifying, but it does clarify what the goals of the Islamic State and other Islamic terror groups really are. It would also be recommended reading for the Muslim sympathizer Obama and his hopeful successor Hillary Clinton. Knowing your enemy is really the first step in defending yourself.