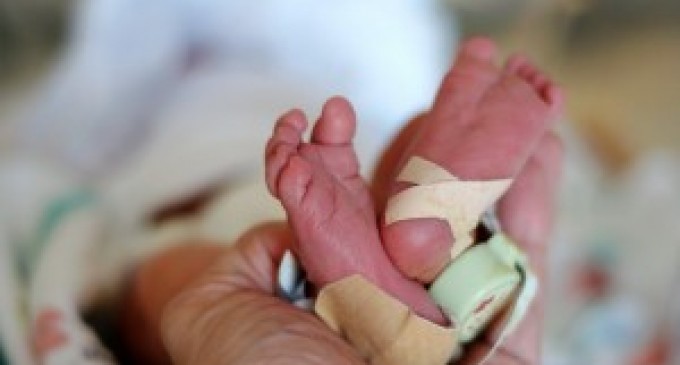 With the security concerns surrounding the rushed and confused implementation of ObamaCare, is it really a good idea to give the administration even more personal data to play with?

The National Institutes of Health (NIH) has begun an initiative to discover the viability of sequencing American infant’s DNA through the “heel stick” blood drawn screening conducted on newborns in hospitals to determine the propensity toward life-threatening diseases.

The article deals with the potential medical ethics pitfalls of a universal newborn DNA sequencing program, but there are additional problems related to security and basic personal freedoms. Making DNA data available to the NIH means exposing it to the Department of Health and Human Services (DHS). What may begin as a well-intentioned research initiative with potential for disease-prevention has the possibility of being used as a political tool. Imagine a refinement of the involuntary government home visits policy currently in the ObamaCare package. Government officials could decide that in addition to smokers and low-income families, the DHS has the right to target folks with blue eyes or of a particular race for involuntary ‘home visits’.

It’s hard to argue against initiatives that aim to promote health, especially where children are concerned, but programs like ObamaCare prove the DHS and other government agencies have a lot of trust to rebuild before they ought to be anywhere near additional data, particularly if it’s collection is mandatory.