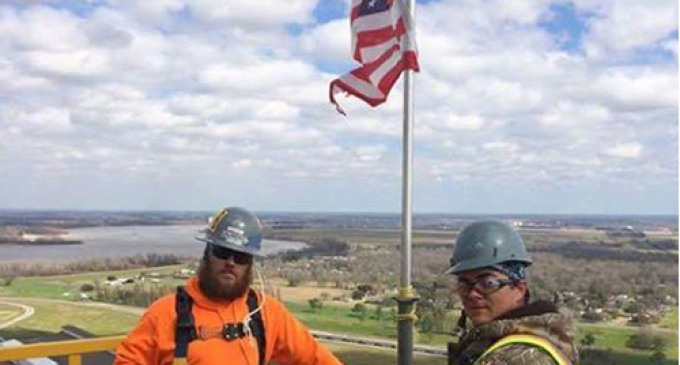 The order to remove Old Glory from work trucks or be terminated has created an army of iron-workers and riggers who will not comply.  Industrial Piping Incorporated is a subcontractor for a plant expansion at CF Industries fertilizer plant in Louisiana.  The crew has been working to complete the project since December 7, 2016, rolling onto the job each day with flags waving in the backs of their trucks.  They are hard working Americans just doing their jobs.

Nothing had ever been said until that fateful day and then the gloves came off.  Lose the flag or lose your job.  The crew was furious and refused the order and showed up to work on Friday, flying their flags and prepared to lose their jobs. The crew, Jarome Hatch, Jim Lovel, Trevor Lewis, Robert Griffiths, Cody Johnson and Daryl McEntyre had the support of the community who got involved and planted American Flags in front of the CF Industry offices.

Read the remarks of the men willing to give up their livelihood to stand up for the principles and the country they love on the following page.