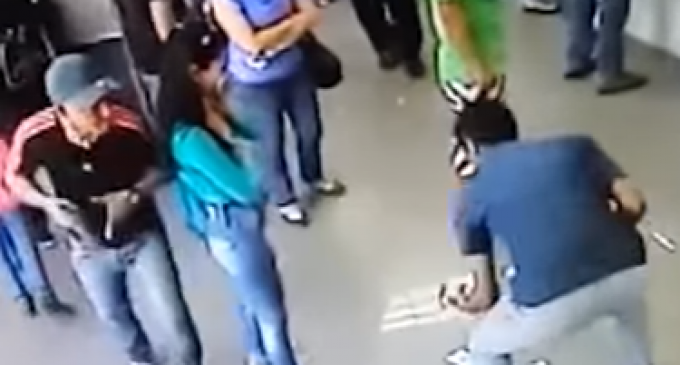 Active Self Protection (ASP) is a vigilance group that focuses on use of weapons and self-defense techniques through instructional videos.  The videos that are used as examples in these highlights are real-life filmed situations that occur all over the globe.  The videos are submitted to or suggested to ASP as a service to those viewing in order to enhance their ability to assess a situation when faced with an armed assailant and emerge from such an incident without harm to yourself or others around you.  The assailant, on the other hand…that's a different story.

In this particular instructional, the video which comes from Venezuela, features an off-duty police officer who is conceal-carrying.  While standing in line at what appears to be a bank lobby or similar facility where ATMs are available, an armed mugger grabs him from behind and puts a gun to his head, demanding his stuff.  The off-duty cop smartly complies fully by immediately dropping all his stuff on the ground and scurries back away from the gun.  A woman who happens to be behind him in line acts as his line-of-sight concealment from the mugger.  As he circles around her, he draws his weapon from his waistband and pivots around to her opposite side, drawing on the mugger and popping him three or four times.

On the final shot, the mugger drops as people are scattering and hitting the ground.  The off-duty cop is not done yet, however.  He expertly puts himself into a defensive position and aims his weapon around the room looking for any other perpetrators or those who might be accomplices.  As he spins and scans the room, it's obvious that he's announcing to the terrified crowd that he's a police officer.  At one point, he clears and approaches the downed would-be robber.

The action is very quick and it's almost unbelievable that the first indication that anyone has in this crowded room that this man is being robbed are met with almost indifference.  The woman standing behind him, who acts as his concealment when he wheels around behind her appears to be perplexed as he then fires on the robber.

The video of his encounter follows with further commentary on the instructional team that produces these analytic breakdowns.