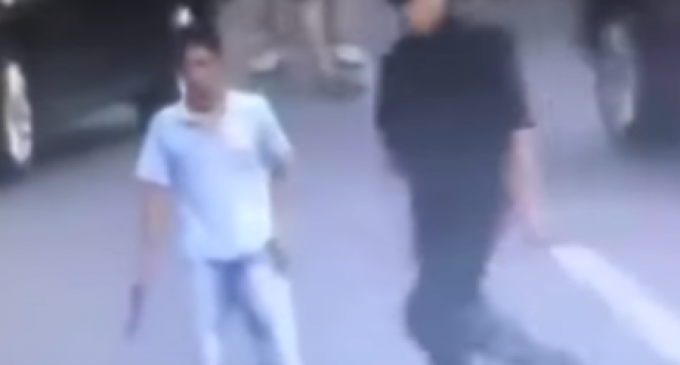 In this particular video, which appears to hail from the Far East, perhaps China, Cambodia, Vietnam, etc., there is an armed suspect in a street surrounded by police.  Why he is in that situation is not clear, but they’re giving him some room.  To his left and slightly behind him, a police officer inches closer to the suspect.

At one point, the officer waits for the suspect to be distracted elsewhere.  I imagine that another officer to the suspect’s front and right probably shouted to him something about dropping his knife.  Whatever the distraction was, it was enough to get the suspect’s attention for a millisecond…long enough to allow the policeman behind him to move in and perform a disarm and takedown maneuver that appears to be a picture-perfect example of a self-defense technique designed to put the attacker at a disadvantage.

As the suspect scratches his nose with his left hand, he has no idea that the officer behind him is moving in for the knife-arm and wrist.  Grasping hold of the man’s arm, the cop quickly and cleanly whips the man’s arm backwards, flinging the blade to the ground and bouncing away to safety, while he then twists the man’s arm, turns and uses his body’s momentum to flip the suspect to the ground on his back, expertly turning him over while other cops join in to hold him.

The move is dangerous and could potentially cause him a very serious wound; nevertheless, the situation culminates in the suspect being taken down so quickly, that he never even has an opportunity to lay a hand on the cop.  It is brilliant to watch.

The instructional video is on the following page with follow-up commentary.