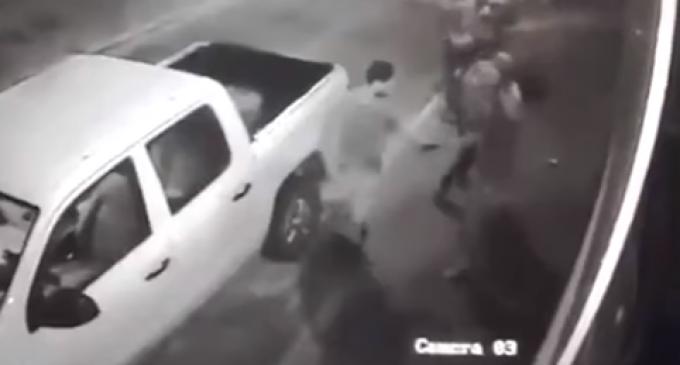 In this particular instructional video which comes from Brazil, an off-duty police officer has stopped at a gas station in his vehicle.  As he approaches the rear part of the automobile, two thugs, one armed with a firearm, approach the cop.  When he sees them, their intention is made clear through the brandishing of the weapon and possibly also in their spoken words.  It's either an attempted carjacking or an armed robbery or both.  It's obvious that the off-duty officer is not nervous or panicked as he gently puts up an arm toward them as if to say, “Listen, you guys need to back off.”  He appears to be speaking with them at this point.

Turning away toward the vehicle, he begins walking back toward the driver's side door, continuing to speak to them.  As they follow, he uses his back toward them to pull a gun from his waistband in the front of his pants.  He then draws the weapon and quickly turns, immediately firing off shots toward both of the robbers, chasing off the two.  The off-duty cop doesn't stop there as he continues to follow them and firing.

The potential robbery is thwarted and the cop has possibly also protected the lives of others who may have been approached later in the evening by these two had they been successful in either carjacking the vehicle or robbing the copy, or both.

A few points of note are discussed on the following page where you can also view the video in its entirely.  John Correia of ASP presents the instructional in both normal and slow motion.