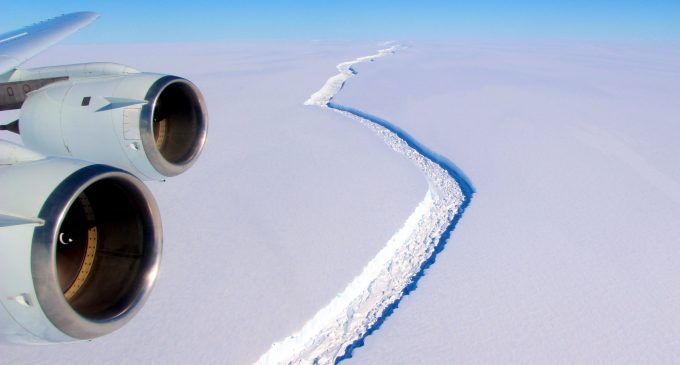 A gigantic iceberg has just broken off the Larsen C ice shelf in Antarctica and will begin floating north in the Atlantic Ocean. It’s as large as one of America’s smaller states (try to guess which one).

Some believe it is the third largest iceberg to break off the continent since satellite measurements became possible. But at this point, scientists are unable to pinpoint the exact path it might take.

The phenomenon of an iceberg forming off an ice shelf is known as “calving,” and the rift in the Larsen shelf that led to the latest iceberg began in 2010. Then, in 2016, it began growing rapidly.

No doubt hysterical climate change advocates will find a way to fit this normal event into their hyperventilated rhetoric. Scientists have tracked Antarctic icebergs since 1978 and have a continuous database that has tracked all the ones since 1999.

From June 1999 through April 2016 the track of each iceberg is available to analyze in order to determine a likely path for new icebergs.

Find out just how big the new iceberg is, where scientists think it could float and the possible impact the iceberg might have on ocean levels as it melts in warmer ocean currents. Details are on the next page.