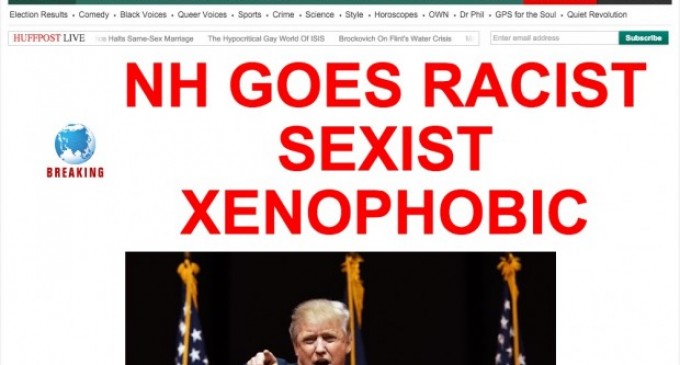 If you live in the state of New Hampshire, you may have been surprised when you opened up The Huffington Post after the winner of the GOP primary was announced. The liberal organization published a piece of “news” claiming citizens of the Granite State are racist, sexist, xenophobic.

That's what the Huffington Post thinks you are, anyway, and they're not bothering with subtlety, either. Rather, they've published that slanderous accusation about the state in all-caps type, and plastered it on the top of their front page.

The accusation is a clear swipe at Trump, as neither he nor the Huffington are necessarily friendly toward one another, and they've often used similar words to describe the GOP frontrunner.

Now, it seems, they're extending the attacks to any state that votes for Trump, as well.

The Huffington Post paired the piece with another headline asking “WTF, GOP?”

See the headline on the next page: