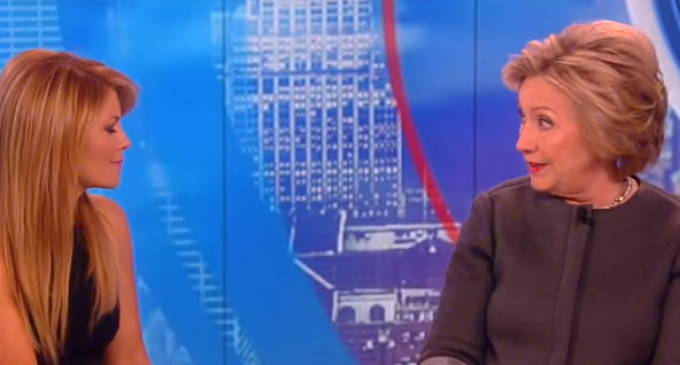 Hillary, sitting with her fellow feminists on The View, was asked about her statement, “The unborn person doesn’t have constitutional rights.”  With her supporters by her side and in the audience, she garnered a loud applause as she stated her position, under-girded by the statement, “I support Roe v. Wade!”

As reported earlier on Truth and Action, “Under our laws, currently, that is not something that exists,” Clinton said. “The unborn person doesn’t have constitutional rights. It doesn’t mean that you don’t do everything possible to try to fulfill your obligations, but it does not include sacrificing the woman’s right to make decisions, and I think that’s an important distinction that, under Roe vs. Wade, we’ve had enshrined under our Constitution.”

Feminists have set up a shrine under the temple of Roe v. Wade, sacrificing 3,000 babies a day on this bloody alter.  According to Hillary, these tiny people don’t have any inalienable rights nor are they endowed by their Creator with anything at all.  They are not equal, nor do they deserve Life, Liberty or the pursuit Happiness, because they are not people, according to Hillary and her army of Feminazis.

Listen to Hillary's answer to the question, “At what points does a child have Constitutional rights?” on the next page.