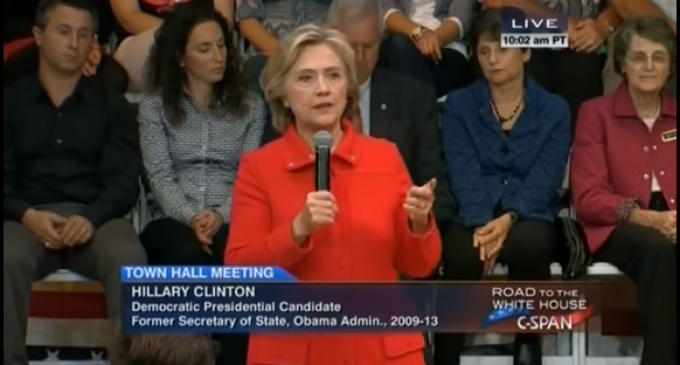 Playing to the far left these days, Hillary Clinton continues to play “I’m for gun control” card.  Hillary has flip flopped on all the media driven issues, gay marriage, illegal immigration, foreign policy, and gun control.  What makes Hillary the scariest politician in this race is she will pander to the group she needs to generate funding.

Back in the 1990’s when hubby Bill was running for President, it was a different time.  Social media was a thing of the future.  Race and opportunist racists group like Black Lives Matter did not exist, as America was not polarized by the extreme left.  It behooved the Clinton’s to play the “moderate” Democrat role.  Those days are gone.  Hillary’s quest has been about her political career, always.  She lost to Obama in 2008, that was the biggest blow in her life.

And she is not about to lose this election.  She will lie, cheat and steal the election-there are no boundaries of ethics or morals she will not breech, no lie to outrageous to tell.

So Hillary will do whatever it takes, and so keeping up with Bernie, is the new Clinton campaign motto.  Guns are bad, guns need to be rounded up.  It’s that position she takes, for it is the far left for Hillary, and guns are very, very bad.

more on Hillary and gun control next page