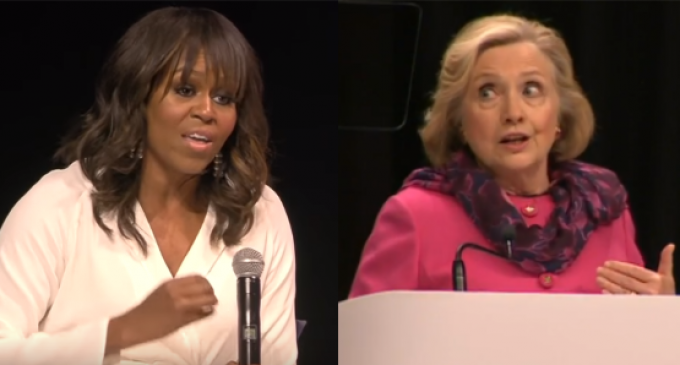 “In light of this last election, I’m concerned about us, as women, and what we think about ourselves and about each other,” Obama said in Los Angeles on Saturday at the United State of Women summit. “What is going on in our heads where we let that happen. So I do wonder what are young girls dreaming about, if we’re still there?”

Obama continued, “When the most qualified person running was a woman and look what we did instead, I mean, that says something about where we are, if we as women are still suspicious of one another, if we still have this crazy, crazy bar that we don’t have for men … if we’re not comfortable with the notion that a woman could be our president, compared to what?”

“I wish that girls could fail as bad as men do and be okay, because let me tell you, watching men fail up, it is frustrating to see a lot of men blow it and win,” Obama said in a cry that women are held to higher standards than men.

Of course, Hillary Clinton seized upon these words immediately to help bolster her never-ended What Happened tour. See Hillary attempt to build up her devastated ego by tearing women and the ‘reality TV president’ on the next page: