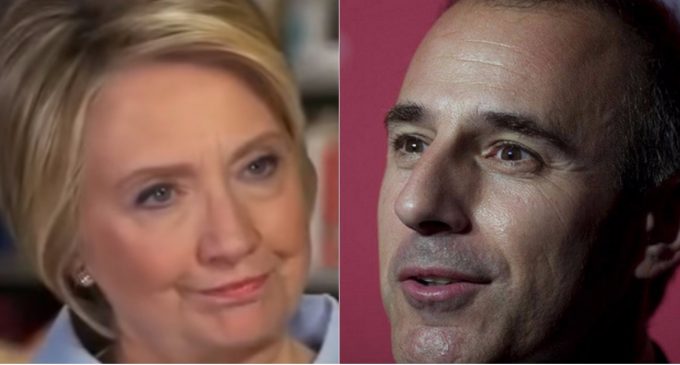 Hillary Clinton was in Philadelphia on Thursday to finish promoting her new memoir, What Happened. Or as most people call it “How can you be so oblivious?”.

Apparently, Hillary just doesn't understand the optics of speaking out about workplace sexual harassment or swallow back her words when it comes to sharing how she really feels about now disgraced NBC anchor Matt Lauer.

Which is ironic considering what former White House intern Monica Lewinsky was pushed into helping out with in regards to Mrs. Clinton’s wifely duties.

But alas, the same wife who refused to comfort her husband after a long hard day of leading the free world is also the one screaming that she is a helpless victim of sexism living in her husband’s shadow.

The Philly Voice attended Hillary’s promotional event for What Happened and asked her what she had to think about former NBC anchor Matt Lauer being fired this week due to sexual harassment allegations.

Continue to the next page to hear Hillary’s response to these sexual harassment allegations and her hilarious views of the concept of Karma.