By not turning over her personal server, Hillary is asking everyone to simply trust her. Of course, nothing in her track record suggests we should anything of the sort…the Clintons are ‘gonna Clinton' as this video jests (warning, addictive): 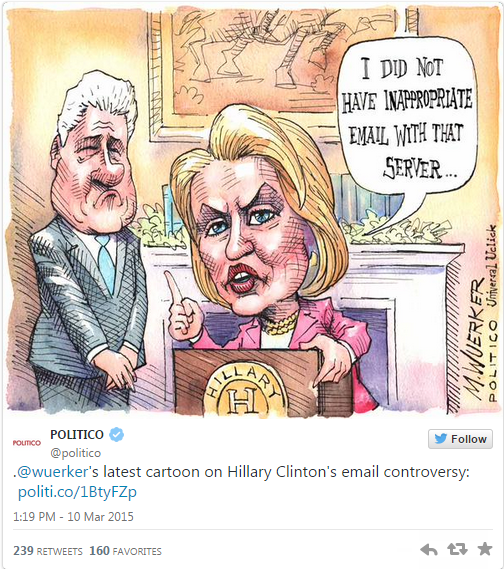 Trey Gowdy (R-SC), who leads a committee investigating Benghazi, is demanding that Hillary appear at least twice before his committee and hand over her server to an impartial 3rd party to deterime what emails were actually of private nature.

Holder has emailed under the nom de plume “Henry Yearwood” in the past, former Justice Department officials say. The Huffington Post reported Tuesday that Holder had used three aliases. The current is unknown.

Republicans familiar with the issue said that even when congressional officials traveled to the Justice Department for so-called “in camera” review of documents, Holder’s email address had been redacted, despite the fact that the documents were not being released.

Unlike Clinton, who used a personal email account and her own private email server, preventing government officials from possessing the emails for record-keeping purposes while she was in office, Holder’s email address is a government, usdoj.gov email address.

A spokesman for Holder claimed to the Huffington Post that the secretive email accounts did not interfere with the production of Holder emails to congressional oversight officials or FOIA requests.

On Tuesday, former Secretary of State Hillary Clinton conceded that she deleted nearly 30,000 emails that she deemed were “private” and not “work-related.”

Finally addressing the email scandal that has engulfed her for more than a week, Clinton said that she turned over nearly 30,000 emails and 55,000 pages of documents to the State Department.

She said “there were over 60,000 emails in total sent and received” on her private account while she was Secretary of state.

“About half were work-related and went to the State Department and about half were personal,” she added. “I had no reason to save them, and that was my decision.”

Her answer will surely raise more questions about whether she alone should have determined what emails should have been turned over to the government, especially after, as Breitbart News noted, Rep. Trey Gowdy (R-SC), who chairs the House Select Benghazi Committee, said there were huge gaps in the emails his committee has received. Gowdy even “mentioned that his committee has not received any emails regarding Clinton’s trip to Libya even though the iconic picture of Clinton from that day shows her on a mobile device.”

“There are gaps of months and months and months. And if you think to that iconic picture of her on a C-17 flying to Libya, she has sunglasses on and she has her handheld device in her hand, we have no e-mails from that day. In fact, we have no e-mails from that trip, Gowdy said on CBS’s Face the Nation. “So, it’s strange credibility to believe that if you’re on your way to Libya to discuss Libyan policy that there’s not a single document that has been turned over to Congress. So, there are huge gaps. And with respect to the president, it’s not up to Secretary Clinton to decide what is a public record and what’s not.”

“At the end, I chose not to keep my private personal e-mails,” she said, claiming that emails she deemed to be “private” dealt with yoga routines and planning Chelsea Clinton’s wedding. “No one wants their personal emails made public. And I think most people understand that and respect that privacy.”