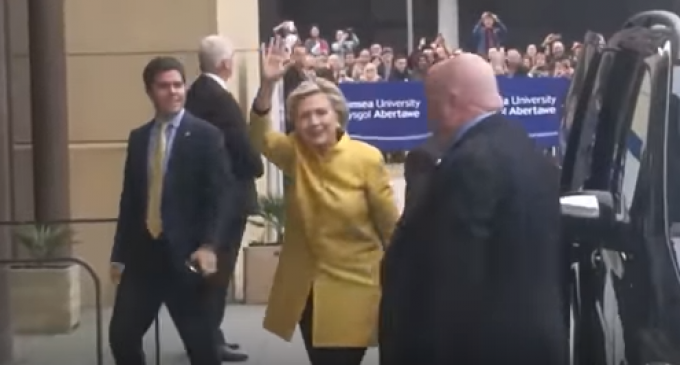 Hillary Clinton's book tour to pitch to an uninterested public the whiny “What the Hell Happened” has taken a little bit of turn to the West as she arrived in the United Kingdom for more book signings.  Her whiny European Liberals fans were impressed that she could take a steamship so quickly across the Pond.  Of course, when it was revealed that she actually took a jet flight, they were quite disappointed because she may have contributed a little too strenuously to the whole “carbon footprint thing.”

The woman who would be queen, performed a little stopover, however, in Wales, where she was receiving an honorary doctorate from Swansea University.  Not only that, but the Clinton Family Crime Foundation pay-for-play scheme really delivered during this trip, because the university renamed its College of Law, the Hillary Rodham Clinton School of Law.  For all of you who are wondering why the school of law, it's because of her brilliance in getting sex offenders of minors off without so much as breaking a sweat.  In her youth, she cackled hilariously when recounting how she humiliated the young girl, while allowing for her attacker to go free.  Yes, sir, it was the talk of the legal world!

It wasn't her book tour that generated so much interest, though, but more the reception she walked into when she arrived at the university.  According to Breitbart, her five-foot walk from the limousine door to the college door was peppered with jeers, boos, shrieks of “fascist!” and one guy, slow-clapping to show his scorn!

Read on the next page about her insult to Brexiteers and watch video of her walk of shame!