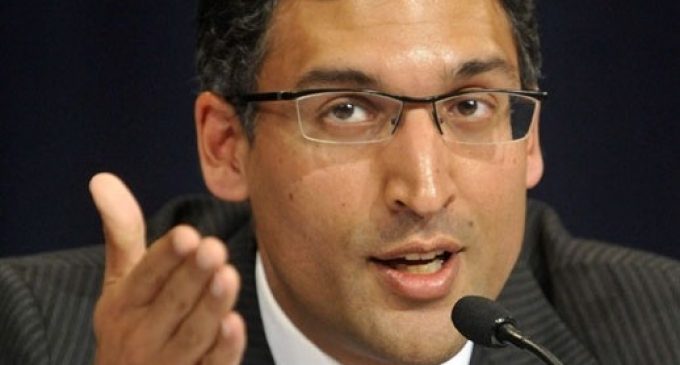 Could it be that the Hawaiian earthquakes have jostled loose the brains of lawyers and judges in the 50th State?  It appears so.  The latest attempt by the Soros shadow revolution has pushed the suspension of disbelief to its absolute limits.  A lawyer representing the State of Hawaii has appeared before the U.S. Court of Appeals for the Ninth Circus to argue an unbelievable set of parameters that would allow President Trump to get his executive order through their court and into the current lexicon of law.

In his arguments, Neal Katyal stated today that the collection of such data as outlined by the Executive Order 13780 contravenes the Establishment Clause, in the First Amendment of the Constitution of the United States: Congress shall make no law respecting an establishment of religion.

Katyal's argument is, in essence, saying that Trump cannot have his EO 13780 passed simply due to the First Amendment of the Constitution (the Establishment Clause) because Congress is not allowed to pass a law that “creates or supports” a religion.  This is a very important point about the First Amendment that Leftists always use to attempt to muddy up the waters, as it were, in the argument regarding Church and State.

This Establishment Clause is one that disallows Congress from passing a law that “pushes their created or supported” religion on the public.  When it was written, it was specifically geared toward the King of England when he was insisting that everyone be attached to the Catholic religion.  The founders feared that a new country's leader may do the same with this or another religion and wrote this amendment precisely for the reason of avoiding a government-promoted religion.

Katyal is insisting on the Liberal slant of the First Amendment, that Trump (through this Executive Order) is attempting to coerce Congress into passing this law which then “forces” the public to follow a certain religion.  There is no law that forbids the mixing or intermingling of Church and State, first of all.  It's an old fallacy that has been pushed by the modern Leftists to confuse people into believing that it is.  This is crux of this lawyer's complaint against the Executive Order.  Unfortunately, in his efforts to prove that this Executive Order is “establishing” a religion, Katyal is actually arguing the Conservative point of view.  His attempts to show a link between Trump saying he doesn't want citizens of this country exposed to violence perpetrated by some immigrants to the specific religious edicts of Islam that promote such violence is something that Leftists have been fooled into admitting by a very shrewd Executive Order.

Katyal goes one step farther in insisting that that a particular brutal religious practice of Islam is in fact their religion, something they've been vehemently opposing since day one of the establishment of the “religion of peace” lie.