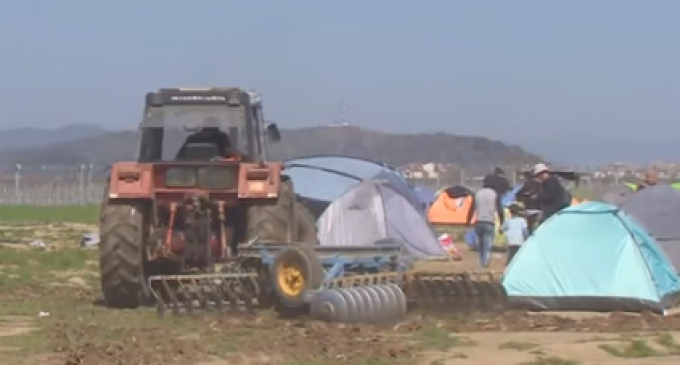 After months of migrants living on his property, a farmer in Greece decided he had enough. He got out his tractor and began to plow the land that these migrants were living on. Lazarous Oulis, a farmer in Idomeni, where 50,000 refugees are stranded on their way to Europe, rolled out his tractor on Thursday to prepare his fields for Summer. While he's understanding of the immigrants plight, the financial burden of not planting in his fields was too much. So he did what he had to do.

In a video you can watch on the next page, you can see Oulis plowing his fields, where a tent city has emerged. While nobody was injured, he did run over a few tents, leaving some migrants pretty upset. One in particular didn't understand why the farmer had to plow his land when there were people living there.

Well, it his land.

And it's important to note that Oulis set aside a few acres for migrants to inhabit, under the condition that the various help organizations in Greece would help him clear his land eventually. After the financial burden became too much and those organizations failed to deliver on their promise, he took matters into his own hands.