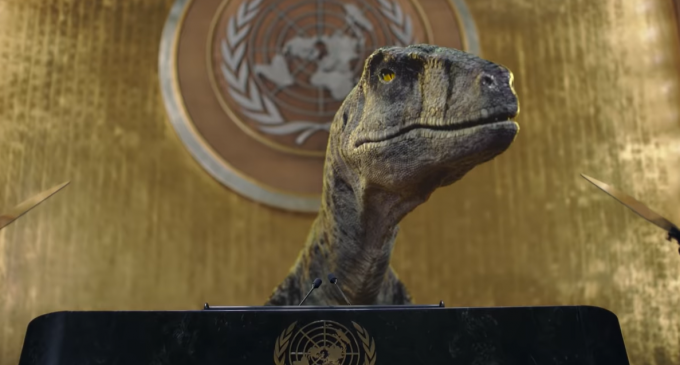 In what is at least in part a ‘look the other way move', the United Nations has released a strange ‘extinction' video over climate change. NPR just released a piece about how ERs around the country are being flooded with people suffering from quite a list of symptoms ranging from blood clotting to respiratory and abdominal problems.

Yet, the UN puts out an emergency video about a controversial topic that would, even if true, take quite some time to handle.

The video depicts a dinosaur speaking at the UN about the extinction of the human race.

“Going extinct is a bad thing,” said Frankie the Dinosaur, a character voiced by comedic Hollywood actor Jack Black, in a new video from the United Nations in which the dinosaur warns humans about climate change while speaking at the UN.

“At least we had an asteroid. What’s your excuse? You’re headed for a climate disaster and yet every year governments spend hundreds of billions of public funds on fossil fuel subsidies,” the dinosaur said, noting that he thinks money should be spent on poor people globally.