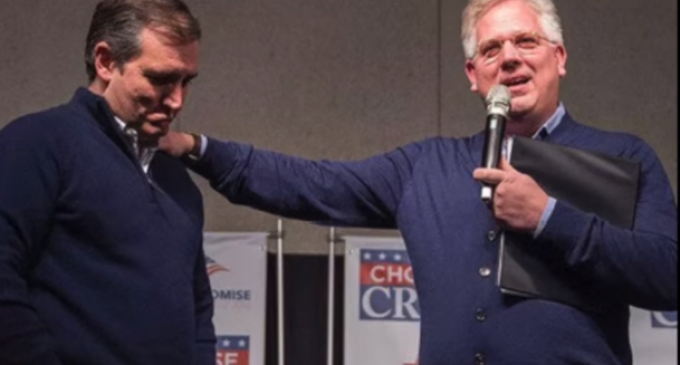 “The Constitution hangs by a thread,” Beck said to a crowd in Utah, gathered to support Ted Cruz for President and Sen. Mike Lee. Beck.  Beck, a convert to the Church of the Latter Day Saints, is a true believer in the Book of Mormon.  He proposed to those gathered at the Utah Cruz rally that Joseph Smith's prophecy from 1843, the “White Horse Prophesy”, speaks of today's crisis, that America and the Constitution is in grave danger if the faithful do not stand up for it.

Smith said, and Beck concurs, ““You will go to the Rocky Mountains and you will be a great and mighty people established there, which I will call the White Horse of peace and safety.” Smith then allegedly claimed that at that future date, “You will see the Constitution of the United States almost destroyed. It will hang like a thread as fine as a silk fiber.””

Though his statements are controversial to many outside of Utah, they rang with truth and strength to those in attendance.  As he spoke the following words, “What held me through was the prophesy that the Constitution will hang by a thread, and this People would remember what our Founders did. It is our responsibility to stand for the Constitution”,  Cruz stood in applause with the audience.

Read more about the Cruz rally in Utah on the next page.  Is Cruz the White Horse prophesied to save the nation?