Yes, we should be hitting ISIS extremely hard and simply wipe this infestation off the face of the Earth. We possess the strongest military in the history of the world (which Obama is currently dismantling). There is no reason why we simply can’t wipe out this band of around 30,000 psychopaths.

Sorry General, have to disagree with you that Obama’s narrative is 3 years behind. You are assuming that he actually wants to eliminate the ISIS threat. He doesn’t…he is intentionally helping create this terrorist threat because he is a terrorist himself and wants to use the threat to further his plan to bring our country under his thumb. His agenda is right on time.

ISIS would not have risen like they have without our help. We created this problem, directly or indirectly.

They seized our advanced arms, which we conveniently left in Iraq for them, to rise to power. They are funded in part by our allies, and we actually trained their forces at a base in Jordan.

Obama has completely opened our borders to let his terrorist associates in. Of course we will be attacked. In order for the Marxists in our government to obtain control they need to have a real crisis to lock down the country.

This is a plan being carried out with precision. 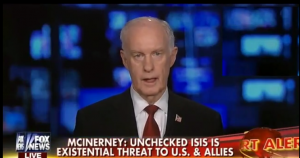