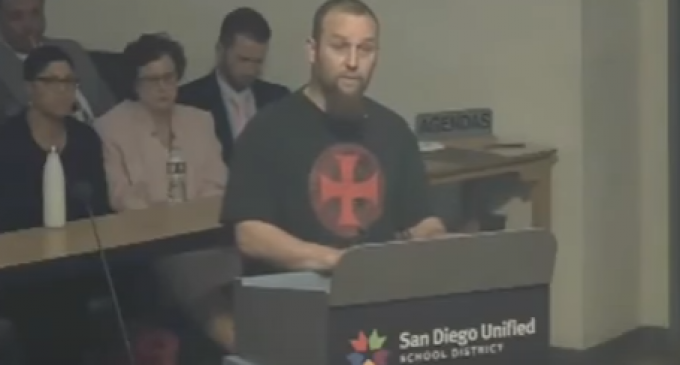 The Department of Education has been on a crusade since the 1970s when President Jimmy Carter first created the bloated 6,000+ government employee administration in authority over all state-controlled public schools.  What is that crusade?

Remove the Christian God from the lives of children.

The public school system…even the entire government itself…operates under a false premise that the State (government) and Church (Christian/Judaic faith) are legally bound to separation.  This is a fallacy.  There is no actual law, Constitutional or otherwise, that dictates a separation of church and state.  Although, no doubt, the Huffington Post will disagree vehemently, the fact remains that history is history and truth is truth.

There is legal doctrine developed over the last 50 years that is completely hostile toward religion and religious based ideals.  It started with the Supreme Court and continuously escalated and evolved from there to a modern-day interpretation of the true meaning of the First Amendment.  As is always the case, anytime prayer or God are mentioned in conjunction with a government entity, there is always the call of “separation of church and state” without the realization that there is no such law.

The “freedom of religion” tenets of the Founding Fathers have gradually been whittled away into a belief of “freedom FROM religion,” making faith the outlier rather than the catalyst.  The greatest upheaval of the American slavery system was solely due to the efforts of the church and the Christians who believed it to be wrong.  The greatest period of enlightenment in the United States was that which was initiated by the church and its pastors and ministers who withstood ridicule and violence in order to effect change (incidentally, the very same change that Liberals today tout as their shining achievement).

The public schools have devolved into a social experiment with its main purpose to determine how completely it can wash the young mind of its connection to faith and God.  However, in that social experiment runs the deep, dark and secret agenda of the Leftist manifesto of introducing to the American youth an alternative to traditional Christian/Judaic belief systems.

Over the past decade, there has been a specific and concerted push to help make Islam the preferred faith of children in school.  It’s not clear exactly why they would want this, but one could surmise that they are doing so based solely on the fact that Islam is nearly the polar opposite of those traditional “White European” religious beliefs and this, in and of itself, is anathema to Progressivism and the modern Democrat Party.

The effort has now reached a boiling point and the parents of America are fighting back.  One parent, Chris Wyrick of San Diego, California noted that his son was being forced to study pro-Allah material at his elementary school and took umbrage with that fact.  He wrote an impassioned speech and took to the podium of the school board .