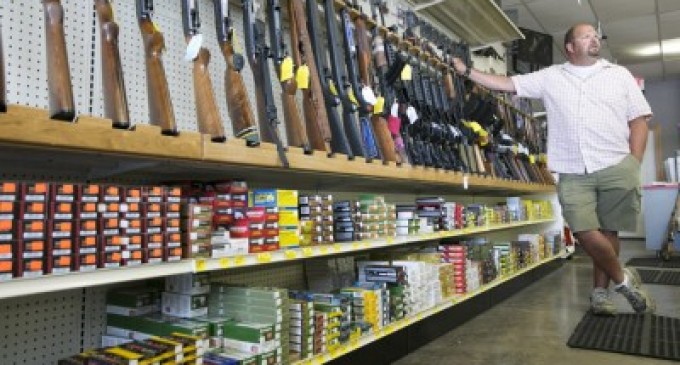 The ammunition shortage that's happening across the country is now creating fist fights within stores.

“I had a report yesterday of a fistfight in a sporting goods store, people trying to get rimfire ammunition off the shelf,” Mark DeYoung, the chief executive officer of ammo manufacturer Alliant Techsystems, told The Wall Street Journal.

Why are we seeing a shortage of ammo? In part, it's due to the large increase in gun sales since Obama has taken office, with the biggest demographic being people in their 20s and 30s.

But we are also witnessing moves by our government to deplete ammo supply.

In 2013, DHS purchased at least 1.6 billion rounds of ammunition – enough to sustain a war the size of the Iraq war for 20+ years.

Recently the EPA declared that the lead in bullets should be controlled as a ‘toxic substance' and has shut down the largest ore to lead producer in the western world.

The war on ammo is a war on the 2nd Amendment.

The ammunition shortage in the United States has gotten so bad that fistfights have broken out over bullets. If that wasn’t bad enough, Walmart stores are limiting customers to three ammunition purchases a day.

“I had a report yesterday of a fistfight in a sporting goods store, people trying to get rimfire ammunition off the shelf,” Mark DeYoung, the chief executive officer of Alliant Techsystems, a major ammo manufacturer, told The Wall Street Journal. “So there is still demand and customers are still very anxious to get product.”

At least three elements have contributed to the shortage: government stockpiling, panic buying in the wake of gun control legislation, and hoarding. A television station in Michigan reported it could be another year and a half before supply catches up with demand.

Alliant has had “record breaking profits” in the third quarter of 2013 (July through September). There have also been reports that ammunition has been stolen from mail shipments, The Journal’s Corporate Intelligence feature noted.

Civilian ammunition demand has increased so much that Alliant has actually converted part of a plant that makes bullets for the military to produce commercial ammo. Even with the increased production, DeYoung said the demand for ammunition is about 13 percent higher than the supply.

Shooters are certainly feeling the pinch of the ammunition shortage. The Idaho State Journal reported that the cost of a brick of 22 shells in Pocatello has increased from $19.95 to $24.95 over the past year.

That is if gun owners can find the ammunition in the first place. The Davy Crockett Gun Shop in Pocatello only received nine boxes of .22 shells in its last shipment, the store’s owner Virginia Crockett, told The State Journal.

“That’s all we could get, .22 shells and #10 black powder caps are non-existent,” Crockett said. “The ammo companies report that they are working 24/7 to catch up.”

Another Pocatello gun store, Doc’s Gun Bar, is only staying open three days a week because it cannot get enough bullets to stay open, the State Journal reported. The store’s owner, Doc Blanchard, told reporter Debbie Bryce that he’s also seeing a shortage of brass and powder for reloading as well as bullets.

“Manufacturers are running 24/7 and they can sell everything that they make,” Blanchard said.

The CAL Ranch Store in Pocatello is limiting .22 ammunition purchases to one brick (525 rounds). The store’s manager, Arkie Clapier took this step to stop hoarding and panic buying.

“We are in the hoarding mentality,” Clapier said. “Ammo is hard to get and guns are hard to get right now.”

.22 is not the only kind of ammunition in short supply, .40 caliber hollow point bullets and .380 rounds are also hard to get, Tucker Bloxham the owner of High Desert Tactical told the newspaper.

He said four large boxes of .22 rounds he received on Jan. 29 sold out immediately. Blaxham said that was the first shipment of .22 ammunition he had received since September.

“Order volume and demand for product has increased dramatically… we currently have delay in order processing, production and shipment of product.”

The amount of .22 ammunition that customers can buy at Walmart is currently limited to three boxes, Leary reported. A sign in a gun cabinet at a Clinton, Iowa, Walmart read: “Due to increased interest and to better accommodate our customers, there will be a limit of 3 boxes per 24 hour period of ammunition per customer.”