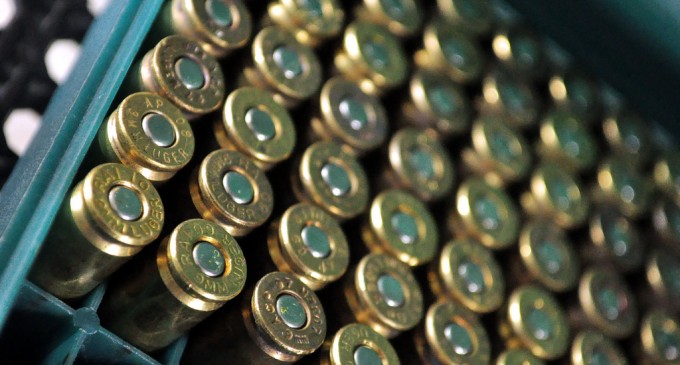 We are just about to see our ammo dry up.

Here's is a way to circumvent our rights to bear arms: make ammunition unavailable.

DHS has purchased 2 billion rounds of ammo in order to hoard the market and drive up the price. Now, the EPA is declaring the lead in bullets should be controlled as a ‘toxic substance' and has shut down the largest ore to lead producer in the western world.

This is, of course, ridiculous. As if we're suppose to be worried about giving lead poising to something we are trying to shoot!

Time to head out to the store…

A couple of years ago we opined that the anti-gun establishment had found a loophole for the Second Amendment and that rather than targeting the banning of all firearms, they would instead turn their attention to ammunition.

The government’s most recent efforts to reduce open market availability through taxation, individual purchase restrictions and a massive stockpiling effort by the Department of Homeland Security has forced ammunition prices to nearly triple, while also dwindling supplies of many popular calibers.

But they’re not done yet.

In fact, they may have finally found a way to circumvent U.S.-based domestic production altogether.

The all-out attack on Americans’ gun rights is now being taken to the next level.

The goal is to regulate all forms of ammunition out of existence, and they’re starting with Doe Run, which is the last of America’s domestic lead processing and manufacturing facilities.

Now, the only ore-to-lead producer in America… the largest in the Western world… has been shut down by EPA regulation.

EPA’s regulatory uncertainty and an estimated $100 million to convert [to non-smelter manufacturing] caused the company to finally throw in the towel.

It’s not just ammunition that’s disappearing. American industry… American jobs…. are being regulated out of existence as well.

Lead’s still going to be manufactured in China, but it’ll be done without any environmental oversight, it’ll be scarce, it’ll be expensive, and we’ll have fragile supply lines.