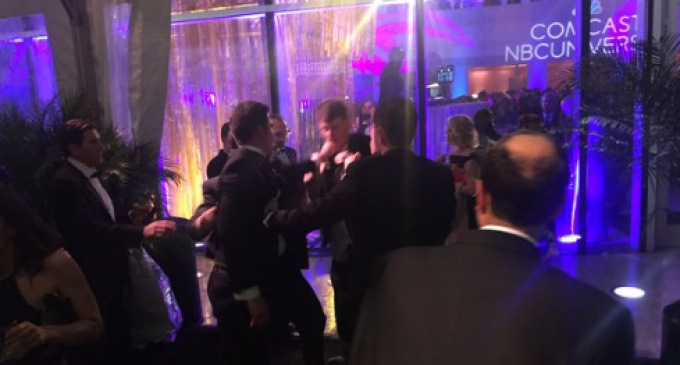 Have you heard that joke about the Fox News correspondent and the Huffington Post chief who walked into a bar? If you haven't, it's okay, because neither has anybody else . . . until Sunday, when it actually happened.

The only difference being that it wasn't a bar that they walked into, it was an afterparty, hosted by MSNBC. But the joke is still funny. However, before you laugh, let the names of those three companies sink in for a moment.

As everybody knows, Fox News hates MSNBC and Huffington Post. Meanwhile, Huffington Post hates anybody that disagrees with anything they write. And MSNBC is trying to climb to the head of the liberal media, while barely clinging to relevancy.

It's an interesting circle.

After an event held at the U.S. Institute of Peace building in Foggy Bottom (insert childish laugh), a fight broke out between Fox News correspondent Jesse Watters and the Huffington Post's Washington bureau chief, Ryan Grim.

While fighting between Fox News and Huffington Post isn't unusual, it's usually done in the typical reporter fashion . . . with well aimed tweets and snarky comments. This time, however, it got physical.

Check out the scuffle in a video on the next page.