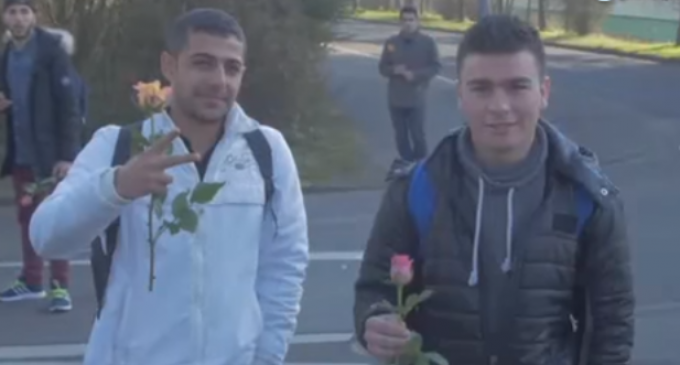 When it comes to Islam and those who practice it, there really is no way to decipher the thinking of their liberal supporters. Logic clearly means something different to them than it does to people who are actually capable of logical thinking, which would explain why women in Cologne have responded to the mass molestation that occurred on New Year's Eve by handing out roses to Muslim migrants as a “gesture against xenophobia”. These are individuals who clearly don't have a conscience or at minimum respect for the rights of others. That's not a problem that a rose is going to fix.

A German television news report showed the women giving flowers to migrants, many of which were involved in the sexual molestation of hundreds of women on December 31st.

How the German government is still keeping that quiet is another mystery in itself. That being said, why should these women be giving out “good-will” roses to these people, when they're clearly the victims in all of this? Are they really more concerned about not spreading Islamophobe than protecting themselves?

See how feminists responded on the next page.