“The fact that the Giffords also reside at Gifford Barn does not render it private,” ruled Judge Migdalia Pares.

This violates not only ones right to religious freedom but property rights as well.

So how is the right to be gay more important than someone’s religious and property rights or free market ideals? Why would it be so wrong to allow people to conduct their business as they see fit…allowing people to, for example, go a gay permissive business if they are gay?

Well, the state has interest in controlling your property, among other things you have, so the encroaching communist government finds ways to achieve their goal of owning you. Hence, some rights are more important than others.

Last year we saw a baker in Colorado forced by a judge to make cake for gays, also against his religious beliefs.

The brides in the same-sex wedding, Jennie McCarthy and Melisa Erwin, filed a discrimination complaint against the Giffords after they were told holding the ceremony could not be held at the farm.

“When we asked why, the owners told us, ‘That’s what my husband and I decided. We’ve been married a long time and it’s great you’re getting married and all, but you can’t do it here,’” McCarthy said.

The Giffords were ordered to pay a $1,500 mental anguish fine to each of the brides and $10,000 in civil damages to the state. If the family farmers cannot come up with the cash in 60 days, a 9 percent interest rate will apply. The couple must also embark on anti-discrimination “re-education classes” for their staff.

Supporters of the Giffords say the government has no right to order the re-education of their religious beliefs.

During weddings, the couple uses their farm trolley to transport guests. They decorate the barn, set up floral arrangements, handle catering arrangements, and take care of other displays on the land.

“Liberty Ridge Farm has employed gay people and has conducted events for same-sex couples,” Trainor said. “The Giffords’ objection was to hosting and participating in the wedding ceremony itself and not to providing service in general to lesbians.”

The lesbian couple ultimately conducted a marriage ceremony and reception at a different location.

The Liberty Ridge Farm case follows a similar incident in New Mexico last year. There, the state Supreme Court ruled against a Christian photographer who wanted to opt out of shooting photos at same-sex weddings. 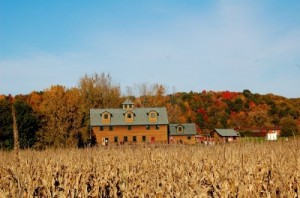