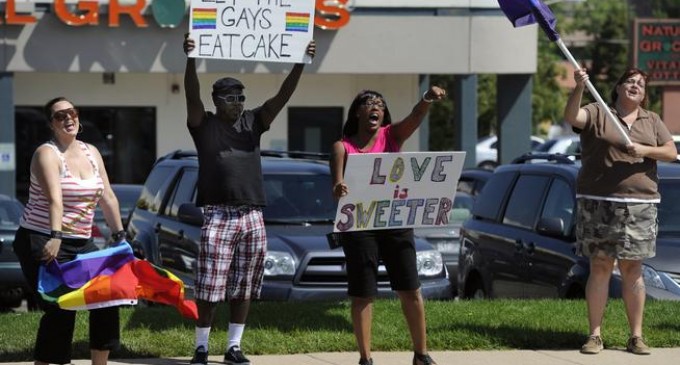 Baker Jack Phillips was ordered by a judge last year to make cake for gay couples, which Phillips had refused to do because of his religious beliefs. Last month he filed an appeal.

The decision by the judge was reinforced by the Civil Rights Commission of Colorado – Phillips must now submit quarterly reports for two years to show how he's changed his “discriminatory practices.”

“Any person doing business in Colorado has to recognize that they have to do business in an ethical and law abiding way and the law says you cannot discriminate,” stated Raju Jairam, vice chairman of the commission.

And what of our First Amendment law that says Phillips has free-speech rights and free-exercise rights?

The ACLU is involved in the case against Phillips: “We at the ACLU very much support religious freedom, but religious freedom doesn't mean that somebody who has a business has the right to discriminate against members of the public who want to patronize the business,” stated Mark Silverstein from the American Civil Liberties Union of Colorado.

Where do you stand with the 1st Amendment rights of an individual as it might conflict with the discrimination of others?

Nearly two years after a same-sex couple was refused service at a Colorado cake shop, a civil rights panel on Friday deemed the act discrimination and ordered the owner to halt the practice.

The state's seven-member Civil Rights Commission reinforced a December ruling from an administrative law judge who said Masterpiece Cakeshop owner Jack Phillips discriminated against Charlie Craig and David Mullins when he refused to make them a wedding cake because of religious objections.

In its decision, the panel required Phillips to submit quarterly reports for two years that show how he has worked to change discriminatory practices by altering company policies and training employees. Phillips also must disclose the names of any clients who are turned away.

“Any person doing business in Colorado has to recognize that they have to do business in an ethical and law abiding way and the law says you cannot discriminate,” said Raju Jairam, vice chairman of the commission.

Craig and Mullins filed charges of discrimination with the state's Civil Rights Commission in July 2012 after they were turned away by the Lakewood baker while trying to buy a cake for a wedding reception.

Colorado law bans discrimination in a public place on grounds of sexual orientation, but Phillips has argued that forcing him to make wedding cakes for same-sex couples violates his right to First Amendment free-speech and freedom-of-religion rights.

Phillips and his attorney are considering an appeal to the Colorado Court of Appeals. He suggested on Friday that the rights of business owners with similar views were taken away by the commission.

“Not all of life is fair,” Phillips said said after the commission's decision. “I will stand by my convictions until somebody shuts me down.”

Craig and Mullins said the panel's decision validated everything they had been feeling. The couple said they have been inundated with support from people across the country since their story became public.

“When it came time to file the lawsuit we realized that this wasn't just about us and they weren't just supporting us as individuals,” Mullins said. “They were supporting the idea that gays shouldn't be discriminated against in public accommodations. We felt like the best way we could honor what they had done for us was to follow this through. It hasn't always been the easy road, but I believe we've been on the right one.”

In his December ruling, administrative law judge Robert N. Spencer said offering the same services to gay couples as it would heterosexual couples did not violate the cake shop owner's right to free speech or prevent him from exercising his religion.

The judge ordered the cake shop owner to “cease and desist” from discriminating against same-sex couples. He said the fact that Colorado does not recognize same-sex marriage does not excuse discrimination based on sexual orientation. Colorado allows civil unions.

“At first blush, it may seem reasonable that a private business should be able to refuse service to anyone it chooses,” the judge wrote. “This view, however, fails to take into account the cost to society and the hurt caused to persons who are denied service simply because of who they are.”

Spencer said the cake shop owner's argument “would allow a business that served all races to nonetheless refuse to serve an interracial couple because of the business owner's bias against interracial marriage.”

The conservative Christian organization Alliance Defending Freedom appealed the ruling in January by arguing that the government was “attempting to force Jack to violate his sincerely held religious beliefs and to compel him to speak a message that is contrary to his actual beliefs.”