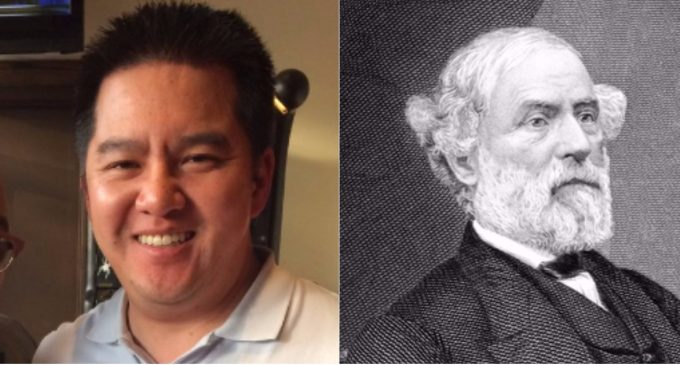 ESPN pulled an Asian college football announcer from broadcasting at a William and Mary University of Virginia college football game out of fears his presence might “trigger” moronic liberals.

We all know 96% of people connected to ESPN voted for Hillary. But, this is even further proof that it’s not just the footballers experiencing cognitive difficulties over at ESPN. Because, really, how does this man on the right below “trigger” people? Take a look. And don’t forget ESPN discriminated against this ASIAN man all in the name of being PC!

This guy and I go way back to road trips with Siena WBB. Now @CoachQatSU winningest coach at Syracuse. Great seeing him in the 518! #GoCuse pic.twitter.com/s3uManpmug

All those massive intellectuals over at ESPN have a lot of explaining to do today. ESPN commentator, Steve Young, is getting patted on the back for offering stunning commentary on Kaepernick’s decision to KNEEL during the national anthem, “it’s a wonderful thing.” But, it’s okay to discriminate against an Asian man for having an Asian last name that “triggers” liberals.

That is how out of touch with reality ESPN is. Head on over to the next page to find out why a bunch of moronic liberals felt the need to gang up against an Asian college sports announcer in the name of being “PC”! And the bizarre explanation ESPN president, Jon Skipper gave for why it is okay to discriminate against certain people!