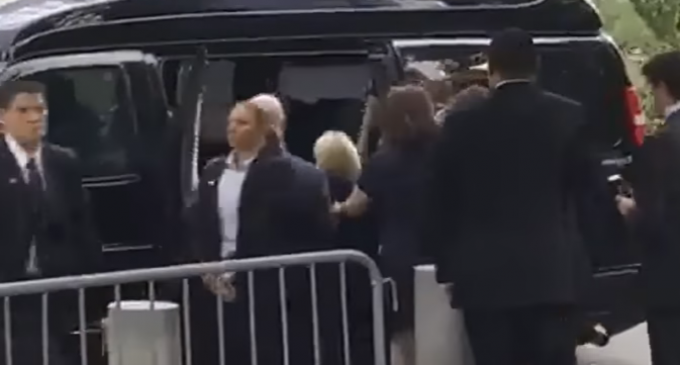 You might be uncomfortable being proven right on the back of another person's misfortune, but after last Sunday, the major media can no longer legitimately ridicule those of us who've question Hillary's health, or try to quarantine speculations regarding Hillary Clinton's physical and mental condition. It was on public display for the whole world to see. If you didn't see the event, we'll have links to videos on the next page.  There is obviously something seriously wrong with this woman's health.

So what does she do? Stop campaigning to cover up her health problems? Continue campaigning and keep keeling over, having coughing fits, and displaying odd, seizure-like movements? She's out of workable solutions for hiding it anymore.

And our “friends” at the major media outlets can no longer call those of us who have questioned her health for months, “conspiracy nuts.”  What makes that even more delicious is that they've had to admit it.

Now they're forced to admit something is really wrong, and worse for them, they must discuss the possibility of Hillary being forced to abandon her candidacy and speculate about what would come next.

If you're not familiar with what happened last Sunday, Hillary managed to last only 90 minutes at a memorial for the fallen of 9/11 at a ceremony in New York.  Weakening and becoming unstable, she appeared to keel over as secret service and other officials caught her and shoved her into her van, her feet dragging on the ground with a mysterious metal clip seeming to come out of her pant leg, or at least bouncing off of it.

Originally described as just a case of having gotten over-headed (in 80-degree weather), it was later stated that she has pneumonia.

So, the question must now be asked: What happens if she drops out of the race?  Take a look at that examination here.

Our mainstream media colleagues with their mindless devotion to Hillary are way behind the curve on this one, and it's fun watching them try to catch up and dance around the fact that they've been caught flat-footed.

So let's take a look at this potential game-changer a bit closer.