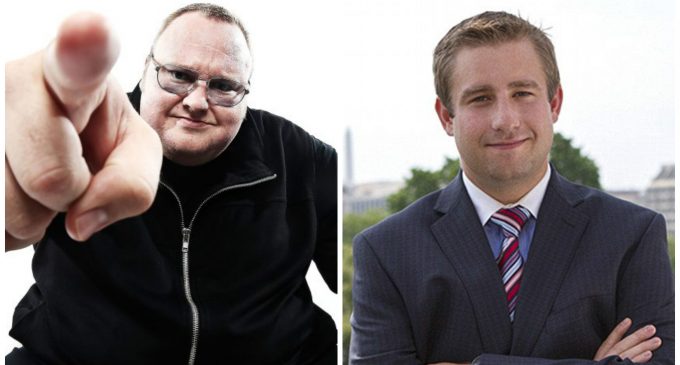 Don't be surprised if the next headline you read in upcoming weeks regarding Kim Dotcom is that he died suddenly of a heart attack, or a train accident, or a “botched robbery” attempt.  There is a mounting pressure that is building up surrounding the Megaupload baron who was arrested in January of 2012 in a joint operation of the FBI and New Zealand special police in Aukland.

Kim Dotcom has been fighting extradition to the United States in the courts of the tiny nation for the last five years and it appears that the U.S. government is finally getting close to its goal of having him transported here to American soil.  That is the very last thing, though, that many on the Right want to see happen due to the overwhelming feeling of dread that surrounds this man's current predicament.  Yes, he has questionable business practices, but those initial charges against him for international digital piracy and copyright violations has been dismissed.  He now faces a brand new round of charges against him.  The U.S. Government REALLY wants this guy badly.  Hmmm…

At any rate, let's skip back a few years to quickly recap the interesting series of events surrounding the “unsolved” murder of Seth Rich.  Rich was the Data Director of Voter Registrations for the Democratic National Committee (DNC) during the famous Clinton-Sanders war that was threatening to tear apart the Convention of the Jackasses.

Rich was an idealistic young Liberal who really loved and supported candidate Bernie Sanders.  In the normal course of doing his daily duties for the DNC, he began seeing a specific thread of traffic in emails that crossed his desk between John Podesta and Debbie Wasserman-Schultz that intimated that the fix was in and Hillary would be the candidate REGARDLESS of the primary state elections outcomes!

This was enough to send Rich into a frenzy and he began to archive all the emails and attachments (24K+ emails and 17K attachments that the FBI has admitted to) and located a man named MacFadyen in London who was a known WikiLeaks associate.  Once the information of the emails broke, Rich's days became numbered.  It was only a matter of time before he would be pinpointed as the leaker and eliminated from play.

A month later…the unthinkable…at least for Rich's parents.  They received a call from Washington, D.C. authorities that their son, Seth, was dead after a botched robbery attempt.  The highly suspect circumstances surrounding the murder led many to believe that he had not only been the DNC emails leaker, but also the target of a professional hit as political payback for having crossed the party and one of the powerful Clinton family members.

A special investigator joined the case, paid by a third party sour ce on behalf of the family (for which the family objected).  He uncovered possible collusion between the DNC, the mayor's office, and the D.C. police.  An informant within the force told Wheeler (the investigator) that they were given a specific stand-down order in reference to the Rich murder case.  There was also the issue of the FBI and the D.C. police giving two different answers to the question, “Where is Seth Rich's laptop?”

Now, another player in the story has emerged with a titillating announcement.  He claims that he is a personal source, with evidence, that can verify beyond a shadow of a doubt that Seth Rich was, in fact, the WikiLeaks source for the DNC emails.

Move to the second page to see the claims by Kim Dotcom as and the ensuing panic at the DNC: