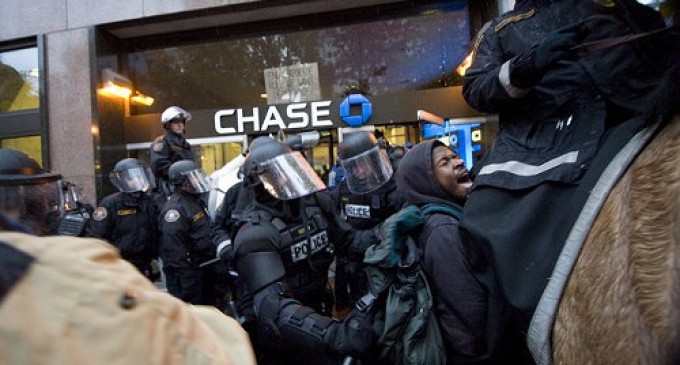 The Federal Government discovered a hint of the potential anger it might stir up after the recent announcement the food stamp program would be suspended in November. Now the Department of Homeland Security (DHS), established to defend America from terror attacks, plans to spend $80 million to hire armed guards to protect IRS and other government buildings during “public demonstrations” and “civil disturbances”.

According to a solicitation posted on the Federal Business Opportunities website, the Federal Protective Service (a unit of the DHS), is looking for a contractor to supply armed Protective Security Officers (PSOs) to guard a variety of government buildings in the region, including “IRS buildings(s) during tax season.”

“PSOs will be required to be armed and some posts may require screening of visitors using x-rays/magnetometers,” states the solicitation.

The armed guards will be used during “public demonstration(s),” as well as “civil disturbances, or other unanticipated events on an as-needed basis.”

Despite the IRS hiring 16,500 new agents last year, the government has denied the government plans to seize fines related to Obamacare non-compliance directly from bank accounts, but it seems the DHS is preparing for the worst-case scenario.

Help to spread the word: share, if it worries you that the government threatens to halt its food stamp program and then spends $80 million to hire armored security personnel.