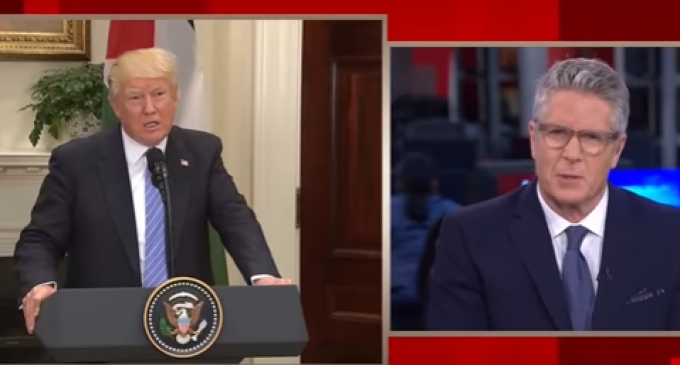 Morning Joe is a cable show on MSNBC that features Mika Brzezinski (pretty darned sure she added that extra “Z” in there just to get famous) and Joe Scarborough as they fake-parry each other in a hilarious back-and-forth that resembles a female Chris Mathews and a male Lindsay Graham taking jabs at each other.  Realizing that the audience for Morning Joe is about the population of Hackensack, New Jersey, there probably aren't a lot of you out there who actually know what this show is or what it's supposedly about, but rest assured, it is almost up there with Crossfire (when it didn't feature Tucker Carlson).

So, Mika's gotten really wordy and mouthy lately…nearly as wordy as me and as mouthy as Rachel Maddow on lithium.  She had Donny Deutsch on the show and was setting up the poor man's Judge Napolitano for a coming rampage on the Trump White House.

MIKA:  Who is it in the White House that can be trusted?  Who can be trusted to give a statement to explain where we stand in this administration?  To explain that this presidency isn't falling down on a House of Cards with lies written on them.  I mean, this is a bad situation and the people in the White House are making it worse by being Trump's stooges.  Donny Deutsch, am I overstating things?  What are the optics you see?

All this, coming from a woman whose biggest claim to fame is that her daddy was an advisor to Jimmy Carter!  Oh yes, by all means, Mika, elaborate on the House of Cards with lies written on them.  Let's talk about your papa's former boss, President Carter and his little fetish with interfering in military operations and screwing up a very important hostage rescuing from Iran.  Let's talk about the House of Cards in the 1990s that had your daddy's Democrat Party defending the president receiving oral sex under the Oval Office desk.  Or how about the Housse of Cards that allowed Osama bin Laden a second spin on the wheel of bring America to its knees?

Perhaps you'd rather have a long dissertation on the loss of America's Triple-A rating with Standard & Poor, or the Benghazi deaths of Ambassador Stevens and 3 other Americans, or the annexing by Russia of Crimea, or the formation of ISIS, the beheadings of Christians, the killing of cops, the rioting in Berkeley, the mass killings of gays at a night club in Florida, the Boston Marathon bombing…all on Obama's watch.

Donny Deutsch follows up with his “optics,” which apparently is a code word down in Leftyville for “moronic conspiratorial opinions.”