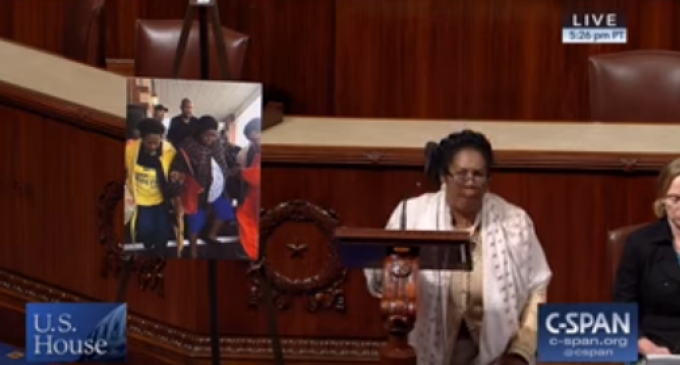 US Misrepresentative Shirley Jackson Lee (JA-TX) oversees the 18th District which is comprised of Houston, recent host to the destructive and terrible floods from Hurricane Harvey.  Her district is one of a few in Texas that voted overwhelmingly to elect Hillary Clinton to the White House.

Lee has decided to enter the fray in the middle of this NFL “taking the knee” controversy by…well…deriding President Trump for speaking his mind.  You see, it’s okay for the NFL players to express themselves in a way that may be detestable to the rest of America, but for the president to state his opinion…well, that’s just too much!

She stood on the floor of the House for a while, doing her best to let the members of the chamber know that she was fit to be tied that a Commander-In-Chief would have the audacity to call out these players and level a charge against them of being un-American!  How dare he make his opinion known…in public forum on social media, no less!

In her own Party of the Jackass way, Lee then did something that was almost too ridiculous to believe as she finished her speech!  Turn to the next page to see how this woman who took an oath under the Constitution to stand up for America, decided that a big middle finger was a better way to go!