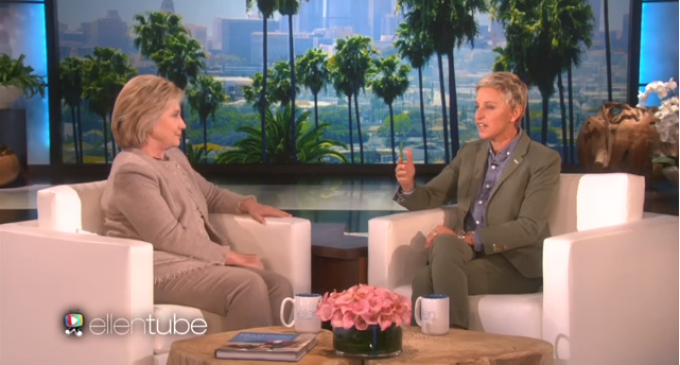 If you thought the media's fawning treatment of Obama for the past 8 years was nauseating, you better do everything in your power to keep Hillary out of the White House, because it looks like they'll be just as enamored with her.

Appearing on The Ellen DeGeneres Show, the former Secretary of State was given a highly-visible platform from which to spout her agenda unchallenged. And unchallenged it went, for host Ellen DeGeneres had no intention of seriously engaging with her guest.

Oohing and aahing over Hillary, DeGeneres threw soft ball after soft ball at the Democratic frontrunner, whining that just about everybody seems to have it out for her. Not one to let an opportunity to feel for herself go to waste, Hillary eagerly joined in, lamenting that people, for whatever reason, just don't appreciate her manifest brilliance.

Between this and her selfie with Kim Kardashian, there was no time for Hillary to discuss her involvement in numerous scandals, such as Benghazi, her email improprieties, and any number of misdeeds committed during her long time in politics.