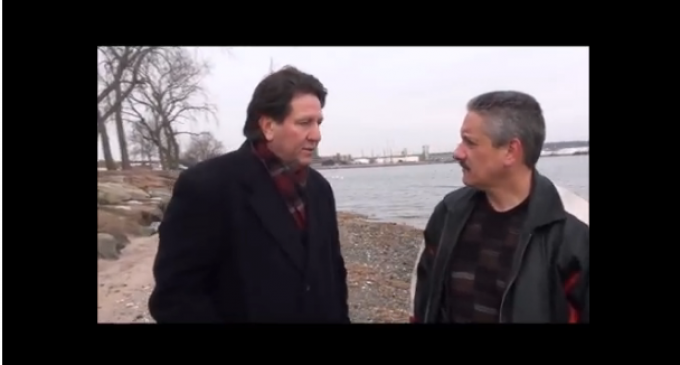 Navy veteran and firefighter John Cinque made national news when he told Connecticut state lawmakers he would not comply with new gun laws last year.

Since then, he has revealed that Branford Police Officer Joseph Peterson told him “I can't wait to get the order to kick your door in.”

Peterson is actually one of the state's most highly decorated officers, yet, he has made statements like this on Facebook:

“I give my left n*t to bang down your door and come for your gun.”

Peterson has been placed on paid leave while an internal investigation is carried out.

I'm sure he's been placed on leave not for his anti-American, anti-second amendment positions, just that he was foolish enough to state them publicly…just a bit to early in the totalitarian takeover.

Connecticut man revealed shocking comments made by a Branford police officer this week who has openly defended door-to-door gun confiscation.

After the tragic Sandy Hook shooting in 2012, Conn. lawmakers mandated that all “assault rifles” and “high capacity” magazines be banned, requiring all in circulation to be registered with the state. Fearing the obvious move towards confiscation, the vast majority of gun owners have refused to submit, with estimates finding less than 13 percent of rifles being registered.

Navy veteran and firefighter John Cinque, who made national news after telling state lawmakers he would not comply with gun registration, briefly commented on the officer’s statements in a discussion with gubernatorial candidate Joe Visconti last Friday.

“I’ve had contact with a police officer in my home town, I live in Branford, and his words straight out were, ‘I cannot wait to get the order to kick your door in,’” Cinque said.

In an exclusive interview with Storyleak, Cinque further detailed the disturbing comments made by Branford Police Officer Joseph Peterson, one of the state’s most highly decorated officers.

“It happened on facebook… he posted to a thread on my wall,” Cinque said. “I have known him personally for 20 years. He was interacting with other friends of mine and it was directly about the video.”

In multiple screenshots captured from the lengthy conversation, Peterson continually argued that law enforcement were not obligated to defy unconstitutional laws. Instead, Peterson stated that he would follow any order given, even if it meant confiscating firearms from close friends.

“But like I said I didn’t make the law,” Peterson told Cinque. “But if it comes down to that then I guess we see how you would respond…”

“I’m not going for any warrants… but if my dept gets them and we have to serve them I will see you then.”

As the conversation’s audience continued to grow, Peterson repeated his pledge, telling multiple people that he would never hesitate to carry out confiscation.

“So if they make a law confiscating guns… You will enforce it?” a Cameron Smith asks in a separate screenshot as Peterson reiterates his stance.

Angered by comments pointing out the state’s unconstitutional law, Peterson goes as far as to say that he would love to knock down Smith’s door personally.

“I give my left nut to bang down your door and come for your gun,” Peterson said. “Hey everyone Cameron is a criminal law breaking psycho.”

Despite the inability of several officers to understand what a constitutional law entails, Cinque revealed that countless Conn. officers are opposed to the state’s ruling.

“As for the cops who will stand with the people… there are many,” Cinque said. “None have spoken publicly but in private i know many who do not like this one bit… they realize they are being used.”

“They are supporters of the Constitutional rights of the people, but they need to speak publicly soon.”