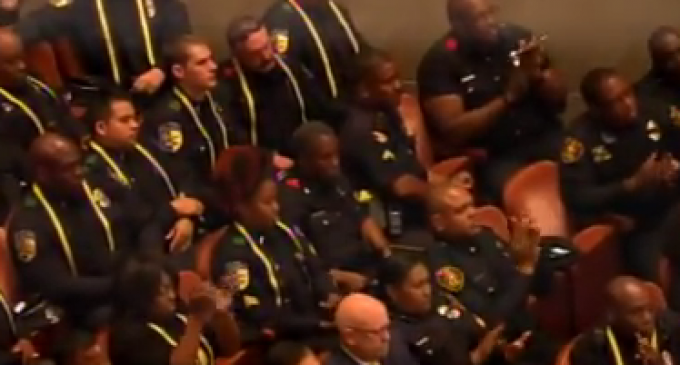 The Divider-in-Chief was on full display at the Dallas Memorial Service for the slain officers.  Once again he opened up his mouth and vile comments came out during a ceremony where reflection and honor of the heroic lives lost should have been the ONLY thing shared.

Yet, Obama, had to lecture those in attendance, while disparaging the slain officers, Lorne Ahrens, Michael Krol, Michael J. Smith, Brent Thompson, and Patrick Zamarripa.

The only thing shocking in this divisive behavior is how disquieting his lack of decorum truly is.

As it turns out, no act of violence may be too disgusting for the supporters of Black Lives Matter. Instead of walking away from the movement, many are doubling down — including our president.

During the memorial service for the slain Dallas police officers, Obama took the opportunity to show support for the movement that lead to their deaths. He even had the audacity to claim that “none of us is entirely innocent,’ as if the cops were somehow partially at fault for their own murder.

The fellowship of officers attending the Dallas memorial service refused to clap many times during Obama's undignified tirade.

View the video and read more on Obama's legacy of alarming lack of etiquette and his obvious dislike for law enforcement and the military alike, on the next page.