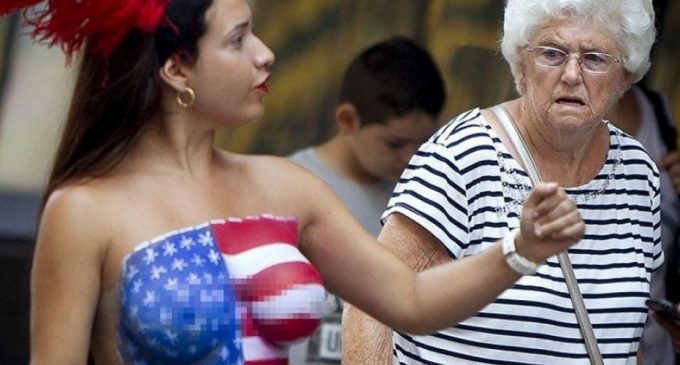 You no longer have to travel to a lawless 3rd world country to be physically harassed by street panhandlers and naked girls begging men for cash. Even children are being reported to be on the receiving end of these attacks.

Vulgar and aggressive “desnudas”, painted naked ladies, are taking over New York Time Square. The cops reportedly can’t arrest or stop the desnudas from accosting men or stealing “because most of them are illegal immigrants.”

You can thank liberal New York City Mayor Bill de Blasio for this new development. Under his new policies, it is next to impossible to stop these street panhandlers and desnudas from physically aggravating or stealing from pedestrians. You can just be walking down the street and see a topless girl taking off all her clothes and being painted before running around confronting men for cash.

This might be coming to your city or town soon if liberal policies and lewd morals continue to gain traction in our country. Just yesterday “America’s toughest sheriff”, Joe Arpaio was convicted for detaining illegal immigrants despite a judge's ruling that was unconditional. Law enforcement literally can’t do anything without getting hauled off to jail themselves if they try to stop illegal immigrants from attacking or harassing citizens.

We don’t want our kids learning that it’s okay in America to let minorities whore out their daughters and encourage their sons to be criminals. That is racist, unfair to the children, and furthermore fundamentally Un-American. More on the police struggle to curb illegal immigrant crime, protect citizens and testimonies of parents, families, and men harassed and assaulted by these street panhandlers and desnudas.