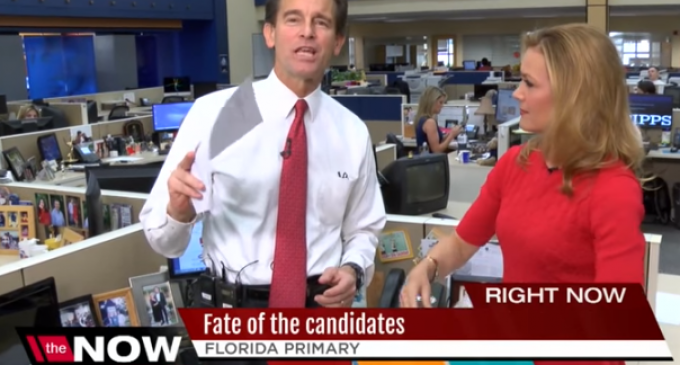 “Where the heck is Trump's name?” asked many voters in Florida as they went to the packed polling places today on Super Tuesday.

Fox New's Jennifer Eckhart has received “dozens of complaints” where Florida voters have discovered that Donald Trump's name has been left off some of the Florida's primary ballots.

Donald Trump's name is no where to be found on some Florida ballots.  Many Floridian's have contacted Jennifer Eckhart at Fox News to find answers to what is going on in the Sunshine State. Other issues also arose in many Orange County polling places, where technical issues forced officials to use the registries of paper to enroll voters in this Florida neighborhood.  The technical issue at numerous locations turned out to be connectivity troubles.

Orange County Supervisor of Elections, Colwes said, “the problem caused delays, but no voters had to be turned away and that every voting precinct has backup books in place to manually check in voters, if needed.”

The heated nature of this race makes these type of issues very serious.  Is there fraud involved or is it just the Second Law of Thermodynamics, that things break down, especially during elections?

Election officials have responded to the complaints:

Florida is a closed-primary state, which means only registered Republicans would get a ballot listing Trump and the other GOP candidates.

Palm Beach County Supervisor of Elections Susan Bucher said that independent voters can't vote in the primary. Bucher said Tuesday that some residents in Jupiter, Florida who were voting in municipal elections complained when they didn't see Trump's name on the ballot. Bucher said none of the other presidential candidates were listed on those ballots either.

“A lot of complaints from people saying my name is not on the ballot in various places in Florida,” Trump wrote on Twitter Tuesday. “Hope this is false.”

Florida was the biggest prize among the five states holding presidential primaries Tuesday, where Donald was counting on a win in Marco Rubio's home state. The Sunshine State, which was ridiculed worldwide after election problems during the 2000 presidential recount, will award 99 winner-take-all Republican delegates and 214 Democratic delegates distributed proportionally.