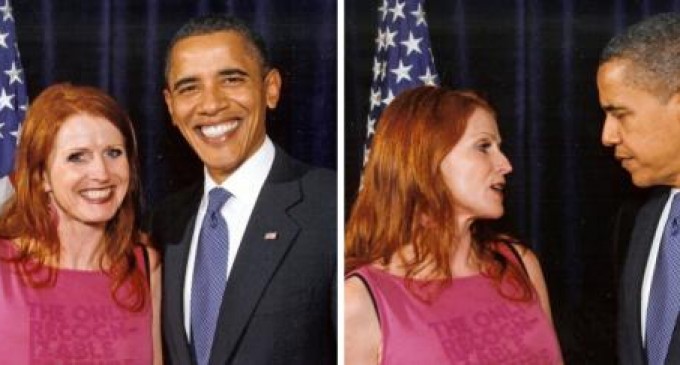 Obama bundler Jodie Evans and Code Pink, the leftist group she co-leads, have been working with terrorist group, al Karama.

Al Karama’s founder and current president, Abdul Rahman Naimi, was designated as a terrorist and al Qaeda supporter by the U.S. Treasury Department in December.

The lines between our government and ‘terrorists' are becoming more and more blurry. Are there any lines anymore?

Obama bundler Jodie Evans and Code Pink, the leftist group she co-leads, have been found to be working with a group whose leaders have recently been declared terrorists and al Qaeda supporters by the Treasury Department.

This most recent Code Pink tie to terrorists involves al Karama, a so-called human rights group. A report published this week by the Washington Free Beacon about Rep. Alan Grayson (D-FL) scheduling a meeting with a representative from the al Karama in November about the Obama administration’s use of armed drones to kill suspected terrorists prompted an examination by this writer of Code Pink’s alliance with al Karama.

Ahmady, who also serves as a top official in an al Qaeda-linked Yemeni political party, did not attend because of visa issues. The State Department said it could not comment on visa matters.

WHAT: Congressional briefing on U.S. drone strikes in Yemen

Faisal bin Ali Jaber, a Yemeni civil engineer whose brother-in-law and nephew were killed by a drone strike

Mohammad al-Ahmady, lawyer and Director of the Yemen division of al-Karama, an independent human rights organization

A spokesman for Grayson told the Free Beacon Mohammad al-Ahmady did not attend the meeting and noted that the terrorist designation for al-Ahmady’s group al Karama was not in place at the time the meeting was scheduled.

Code Pink also worked with al Karama while in Yemen, according to report on al Karama’s website.

Yesterday, 17 June 2013, Yemeni and American activists organized a sit-in in front of the American embassy in Sanaa to protest against drone attacks in the context of American counter-terrorism policy, and to denounce the inability of the Obama administration to close the Guantanamo Bay detention facility. This campaign, launched under the slogan “Human Dignity” in April 2013 by Alkarama and other human rights organizations in Yemen, aims for the closure of Guantanamo and Bagram detention centers. Several members of Code Pink, a pacifist American organization, joined Alkarama and Hood yesterday to show their support to the families of Guantanamo detainees and pay a tribute to the victims of American airstrikes.