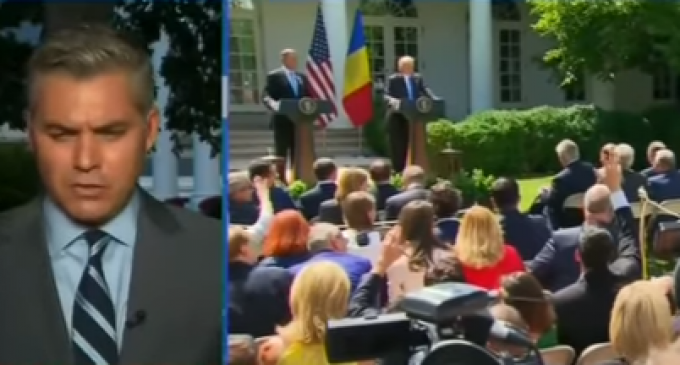 I can still remember Sean Spicer and several other people in the new Trump administration giving a heads-up to the media that there would be changes to the “ordinary, normal” way that White House press conferences were conducted.  With one fell swoop, the mainstream media, the nasty, furrowed-brow hags and the wrinkly, gravelly-voiced fossils of the Old Guard of network news (the Andrea Mitchells, Christiane Amanpours, Lester Holts, and the Chuck Todds) all bent on the destruction of Trump, as well as crushing all Conservative thought and deed, were told in no uncertain terms that they were not always going to be sitting at the front of the class!

It really wasn't that hard to understand.  It was a pretty clear-cut message:  All you network toadies out there who amble right to a duly-designated area of the press conference hall each time one is called are no longer in entitled, permanently-assigned seats.  Pretty simple.  That was the way they used to do things, back when the corrupt and free-range reporters and networks had an opportunity to spin every single bit of news issuing from the White House and who now had to stand in line like the rest of the lower-echelon slobs who always got the short end of the stick in bygone days.

This move accomplished two things:  1) To give the newbies a chance to experience the might and the luxuriance of being able to ACTUALLY ask a question at the press conference and be heard, for once, and 2) To let the Old Guard hags and fossils know that they are no longer relevant and have no power to bend, twist and sculpt the news into whatever form they required that day in order to present the president's words in the absolute worst context they possibly could.  That responsibility was now delegated to the New York Times, the Washington Post, the Hartford Courant, Time Magazine, Newsweek, Sports Illustrated, etc., etc.  And since no one really reads these Liberal rags anymore, it's safe to assume that the ancient ability to CRAFT the news has now had a changing of the guard.

Well, as expected, the Old Guard kids in the playpen of life are beginning to throw a temper tantrum.  Turn the page to read on about how one CNN reporter is ready to hold his breath indefinitely until the White House stops being mean!