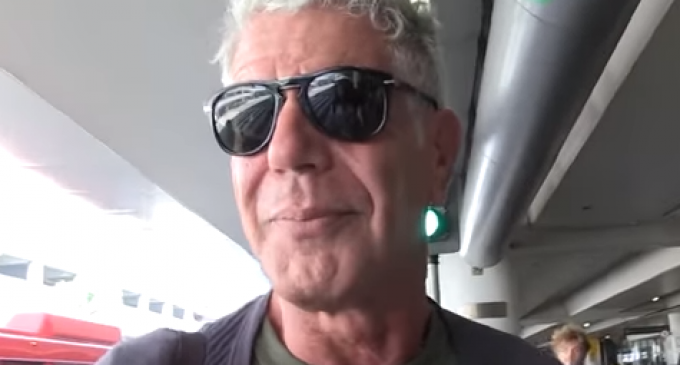 You may or may not remember a man named Donny Deutsche.  He's a fellow New Yorker who at times slithers into the MSNBC studios to belch some inane opinion about [name a Right-wing policy or agenda item] and wait for Mika and Joe to pat him on the head and throw him some table scraps.

Then there's Mark Cuban, a self-made millionaire who lives in California because of his affinity with pretty surfer boys and girls and a penchant for beach volleyball, but is actually from Pittsburgh, Pennsylvania, even though he talks tough like he's from Philly.  He's just a bit confused, I guess, what with having started out as a Disco dance instructor and party planner.

Finally, there's Anthony Bourdain, famous traveling chef who talks like DeNiro, but looks better in a dress than the aging faux-gangsta.  With his own show on CNN called Parts Unknown, the loud-mouthed and ill-mannered cook from Leonia, New Jersey, situated in the heart of the land of girls with big hair and old men with gold chains.

What do these three men have in common?

In fact, Bourdain, in a TMZ self-aggrandizing interview recently, let everyone know that the Jersey Boy would most certainly have served poison to the president if he had the opportunity to kill our Commander-In-Chief!  Turn to the following page for details!