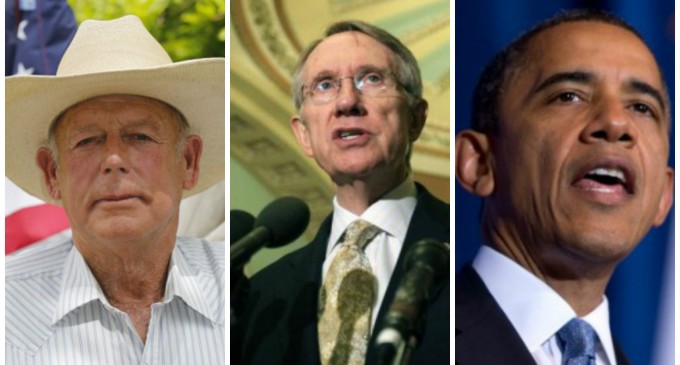 The full weight of the federal government has descended on Nevada rancher Cliven Bundy for grazing his cattle on disputed federal land in 2014, and the 70 year old is potentially looking at a sentence of life in prison.

The real reason he is confined is that he has drawn the ire of corrupt Nevada senator Harry Reid, who is anxious to co-opt Bundy's land in order to sell it to the Chinese, and the federal government, which is anxious to expand control of the western states beyond its current 52% ownership.

Bundy is fighting back with a $50 million lawsuit against Reid, President Obama, and others, but is in solitary confinement and has been for the last few months as he awaits a trial that does not seem to be imminent. One of the problems is federal judge Gloria Navarro, a tainted judge who is also named as a defendant in Bundy's lawsuit, is denying him requested legal representation and seems determined to keep Bundy in prison as long as it takes to break his will.

The final result is far from over, but dealing with a corrupt federal government will be a monumental uphill battle for the crusty rancher.

More on the Bundy lawsuit, page 2: