Mayor Frank Jackson said the ambitious plan that was worked out over five months of negotiations with the U.S. Justice Department will be expensive and will take years to put in place. But he said he sees it as a chance to set an example for other cities.

The proposed reforms come amid tension around the U.S. over a string of cases in which blacks died at the hands of police.

“As we move forward, it is my strong belief that as other cities across this country address and look at their police issues in their communities, they will be able to say, ‘Let’s look at Cleveland because Cleveland has done it right,'” Jackson said.

Steven Dettlebach, US Attorney for Ohio’s Northern District, states with gleeful excitement that the agreement will serve at a national model for local law enforcement, “As the mayor has said we have signed and are filing this 105-page, comprehensive consent decree that once approved by a federal judge will not only serve as a roadmap for reform in Cleveland, but as a national model for any police department that is ready to escort a great city to the forefront of the 21st century.”

There you have it. This is how all of America will become subjugated to a Marxist authority. Expect more riots, cop killing and aquecence to the feds by our cities as a result

This won’t take years to put in place as the Cleveland major suggests. Once the feds have completed their beta testing, expect false flags and manufactured race riots to rapidly usher in complete federalization coast to coast.

The reforms were outlined in a 105-page consent decree filed in federal court. It calls for new guidelines and training in the use of force; a switch to community policing, in which officers work closely with their neighborhoods; an overhaul of the machinery for investigating misconduct allegations; modernization of police computer technology; and new training in avoiding racial stereotyping and dealing with the mentally ill.

An independent monitor approved by the court will oversee the police force’s compliance. Several other police departments around the country, including those in Seattle and New Orleans, are operating under federal consent decrees that involve independent oversight.

The worst examples of excessive force in the Justice Department report involved officers who endangered lives by shooting at suspects and cars, hit people over the head with guns and used stun guns on handcuffed suspects. Only six officers had been suspended for improper use of force over a three-year period.

The city is still awaiting a decision on whether any officers will be prosecuted in two other deaths: that of Tamir Rice, a 12-year-old black boy who was killed by a white rookie patrolman last November while playing with what turned out to be a pellet gun, and that of 37-year-old Tanisha Anderson, a mentally ill woman who suffocated last fall after she was subdued on the ground and handcuffed. 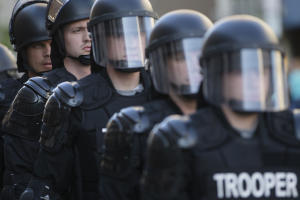 U.S. Attorney Steven M. Dettelbach said that the overhaul “will help ensure the many brave men and women of the Cleveland Division of Police can do their jobs not only constitutionally, but also more safely and effectively.”

Steve Loomis, president of the Cleveland Police Patrolmen’s Association, said he and the union’s attorneys are still studying the agreement.

“I’m hopeful it has reached some good conclusions,” Loomis said. “But the devil is always in the details for these kinds of things.”