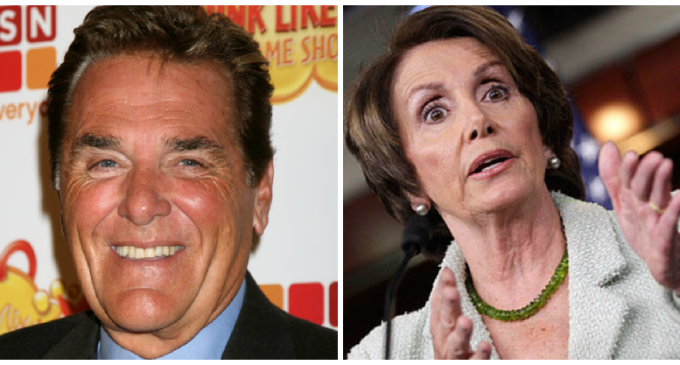 How many people even know old Nancy Pelosi is? She is 77. That is important as just this week she got caught on camera giggling like a schoolgirl during a question on North Korea’s ICBM.

And maybe some of the readers could help me out. What would have been going on or in the water at Pelosi's house back in the 1940s and 1950s to cause her dementia to develop so rapidly?

It’s next to impossible to tell what year Pelosi thinks she is living in or who she thinks is the president.

“President Bush, it’s 2017, and even though you’re reading to kids and too busy, it’s Pelosi on the line, she thinks you’re still president.”

Not just once or twice but numerous times Pelosi can’t seem to recall it’s 2017 and Trump is president. Leftist nut jobs are truly ageless. It doesn’t matter how much progress or change occurs, you can put them at any time in history over the last 70 years and it will be “Russia” or how do we keep the “Blacks” with us.

As of course, as we all know, the Democrats and their frozen Luciferian queen are never with us, we are with them.

You’d think liberal corruption had reached the ultimate low when they tricked the African-American community into believing the party that started the KKK, the Democratic party, was really helping them, not enslaving them on the liberal plantation. But, no. Pelosi, the self-described “master legislator” has even bigger schemes in the works, as revealed just this week.

And to be honest the only reason Pelosi is probably even able to keep Obama and President Trump straight is that the former is black. But wait, senile liberal nut jobs like Pelosi claim not to see color. Unless of course, it is the hazy orange halo liberals keep claiming to see surrounding the president, then they see color.

Really orange bashing is the only acceptable PC form of color based racism these days.

It almost makes one wonder if all these hypocritical liberal psychos are secretly in cohorts with processed foods companies to use Trump hysteria to peddle dangerous mind numbing products. They all use food to describe the Trump administration. President Trump = Cheeto. Attorney General Jeff Sessions = Keebler Elf Cookies. And the list goes on.

But these are just speculated claims, like Pelosi’s, ramblings that over half the country might be mammals. O we know she meant it as an insult. But, the joke's on her as humans are actually biologically mammals and what is the other half of the country then? Soulless frozen faced Luciferian witches? Robots?

She literally accidentally implied that her own party wasn't even people…  And what more proof than that do you need that Ms. Pelosi has advanced dementia and completely senile by this point? All on the next page along with her latest “master” plan for tearing down the presidency.