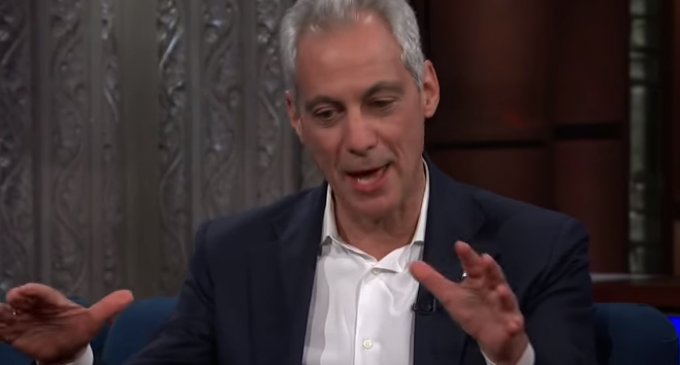 Rahm Emanuel threw back his shoulders and repeated once again is his best big boy voice that the Deep State affirmed that he was a their hero for upholding Barack Hussein Obama’s legacy in Chicago. Late Night Talk show host Stephen Colbert looked right near ready to lose himself in the fever of ecstasy brought on by the dangerous appalling rhetoric Rahm Emanuel continued to blithely share with his studio audience. His body noticeably experiencing a little thrill each time the brain-dead goaded leftist audience broke out into rapturous cheers at his angry words.

The rest of sane America, however, took a collective gasp at the words that preceded to spew out of his mouth.

Rahm Emanuel is mayor of the city with the highest murder rates in the U.S. He doesn’t seem to notice that banning guns has done nothing to stop the murders like leftists claim. All he wanted to talk about was how Chicago was facing a bigger problem and that his main priority as mayor was keeping the city safe from President Trump

Head on over to the next page to hear Chicago Mayor Rahm Emanuel share what he believes is the greatest threat facing his city [besides the Constitution].

Video of this interview on the next page: