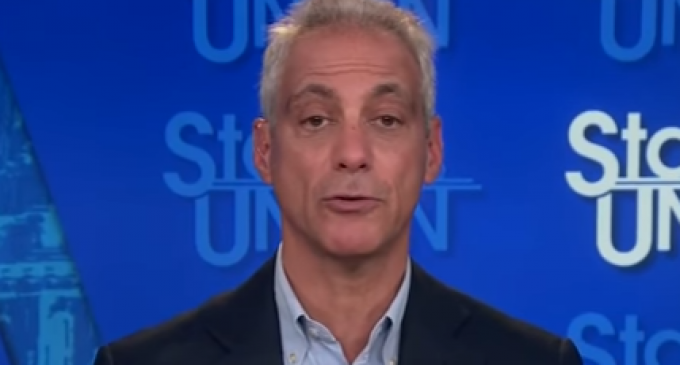 Ultra-Leftist Chicago Mayor Rahm Emanuel, interviewed in friendly territory on MSNBC (meaning he will never be asked anything but softball questions), proclaimed Chicago to be the microcosm of the melting pot of all society when he spoke about the so-called Dreamers (or children of illegal immigrants).

Recently, as you'll remember, he extended the welfare, food stamps, WIC, educational benefits, healthcare benefits, and disability benefits funded by the American taxpayers to the Dreamers and their illegal alien parents as well by creating a new Illegal Alien ID Card.  In his bid to upstage California as the most Liberal of the states, Emanuel is attempting to push as many Conservative buttons as necessary to enjoy his small victory of defiance of federal immigration laws that prohibit his city (or any city in the country) from disrupting enforcement of the law by deliberately hiding, destroying or obstructing access to information and documentation on illegal aliens residing in said sanctuary city.

The mayor of Chicago has made his stance clear:  he has no intention of following federal law and Constitutional statutes that deny him the right to do so and he will not pursue any actions to alleviate the practice of identity theft or false ID carrying on the parts of these illegals who only through day-to-day activities or work “legally” through the possession of illegal or many-times stolen identification cards and documents.

Not too long ago, a California representative fully admitted that he was not only aware of, but knew people personally in and out of his own family who had stolen identities or had purchased or created false IDs in order to work, drive, vote and obtain state and taxpayer-funded benefits.  From ZeroHedge in February:

In testimony provided before the California Senate's Public Safety Committee, Senate President Pro Tem Kevin De Leon (D-Los Angeles) decided to admit that “half of his family” is residing in the United States illegally and with the possession of falsified Social Security Cards and green cards.  Lest you think we're exaggerating, here is the exact quote:

The quote came from a hearing being held on SB54, a California Senate bill that was introduced by De Leon that would make the entire state of California a “Sanctuary State” (we discussed SB54 here:  “California Considering Legislation To Become First Ever Sanctuary State”).

And yet, Mr. Deleon still works for our government.

Interestingly, Emanuel ends his statement in the video with the phrase, “Out of many, one,” a reference to United States motto, “E Pluribus Unum.”  This motto itself has become shrouded in a bit of myth over the last 100 years as Leftists continue to push a multicultural aspect of the population while maintaining individual cultures in isolated pockets, a diametric opposition to the original founding plan of America which made it the crowning achievement (politically, spiritually, industriously, and technologically) of mankind.

Delving into this will answer why Progressives are so dead-set on destroying the nation of one in order to make it the nation of many.  Globalism has insinuated its filthy claws into the fabric of our society and things are about to progress into real race wars fully intended by Leftists like Emanuel, Obama, Waters and Ellison.