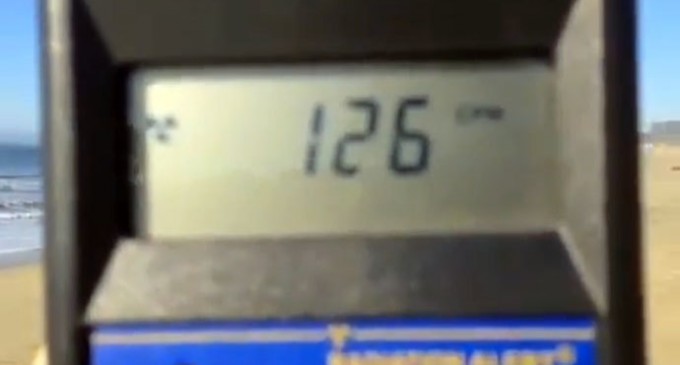 Just last week we posted a story on a report of large plumes of steam coming out of reactor 3 in Fukushima, at the same time the US government purchased 14 million doses of potassium iodine.

Now, one California resident has posted a video, now seen a half-million times and viewable below, showing a 500% increase of radiation on the California coast.

Officials, however, are stating there is nothing to worry about: “It’s not something that we feel is an immediate public health concern,” Dean Peterson, the county environmental health director, told the Review. “We’re not even close to the point of saying that any of this is from Fukushima.”

Yea right! Just trust your officials America and go back to your TVs, there’s nothing to be concerned about here.

Health officials in California are now telling residents not to worry after a video uploaded to the internet last month seemed to show high levels of radiation at a Pacific Coast beach.

The video, “Fukushima radiation hits San Francisco,” has been viewed nearly half-a-million times since being uploaded to YouTube on Christmas Eve, and its contents have caused concern among residents who fear that nuclear waste from the March 2011 disaster in Japan may be arriving on their side of the Pacific Ocean.

Throughout the course of the seven-minute-long clip, a man tests out his Geiger counter radiation detector while walking through Pacifica State Beach outside of San Francisco. At times, the monitor on the machine seems to show radiation of 150 counts-per-minute, or the equivalent of around five times what is typically found in that type of environment.

After the video began to go viral last month, local, state and federal officials began to investigate claims that waste from the Fukushima nuclear plant has washed ashore in California. Only now, though, are authorities saying that they have no reason to believe that conditions along the West Coast are unsafe.

The Half Moon Bay Review reported on Friday that government officials conducted tests along California’s Pacific Coast after word of the video began to spread online, but found no indication that radiation levels had reached a hazardous point.

“It’s not something that we feel is an immediate public health concern,” Dean Peterson, the county environmental health director, told the Review. “We’re not even close to the point of saying that any of this is from Fukushima.”

According to the Review’s Mark Noack, counts-per-minute does indeed measure radiation, but “does not directly equate to the strength or its hazard level to humans.” And while the paper has reported that testing conducted by Peterson’s department on their own Geiger counters has since revealedradiation level of about 100 micro-REM per hour, or about five times the normal amount, officials are confident that there is nothing to be concerned about.

“Although the radiation levels were clearly higher than is typical, Peterson emphasized that it was still not unsafe for humans,” Noack wrote. “A person would need to be exposed to 100 microREMs of radiation for 50,000 hours before it surpassed safety guidelines by the Occupational Safety and Health Administration, he explained.”

Even so, officials are still uncertain as to why those levels — even if they are relatively safe — seem to be five-times higher than what is expected. Peterson told the Review he was “befuddled” over the ordeal, but suggested the culprit could be something not too sinister — such as red-painted eating utensils buried on the beach.

“I honestly think the end result of this is that it’s just higher levels of background radiation,” he said.

Researchers at the Geiger Counter Bulletin website have since tried to make sense of the reading on their own, and agree that the levels being detected are several times over what should be expected. According to a post on their website from this weekend, however, an independent testing of soil taken from near Pacifica State Beach tested positive for some radioactive material — but nothing that would have come from Fukushima.

The results of testing conducted by California’s Department of Public Health are expected to be announced later this week.