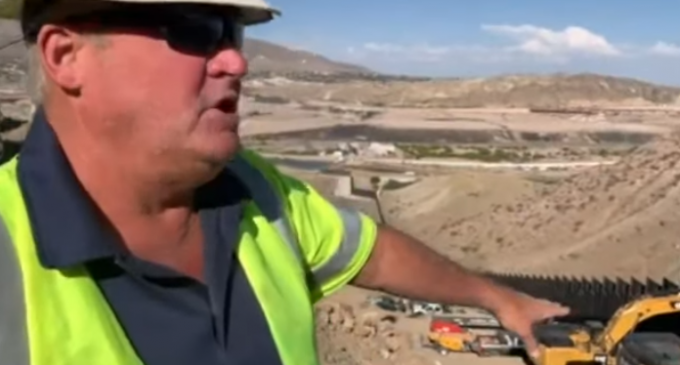 “Foreman Mike” provided an update over the weekend on the construction project in Sunland Park, New Mexico west of El Paso, Texas by “We Build The Wall.”

WeBuildTheWall, Inc. was incorporated in the state of Florida in December 2018, and was founded by Brian Kolfage, a triple amputee who served in Iraq from 2003-2004. The project's GoFundMe campaign raised over $20 million from over 325,000 private donors and has made great progress in erecting a large segment of border wall.

In the video on the next page, Foreman Mike tells us that the wall only lacks 350 feet of the overall goal of 2,300 feet.

Forman Mike also discusses the extent to which traffickers have used the area. “When I got here 17 days ago there were 450 people a night crossing. When equipment started arriving it went to 300. When manpower started working we went down to 200. When we started placing the bollards it went from 70 to 30 to 0. We’ve had no crossings in the last 8 days.”

He goes on to describe how “extremely dangerous” the situation is with the Mexican drug cartel scoping out the project and its workers. Move to the next page.