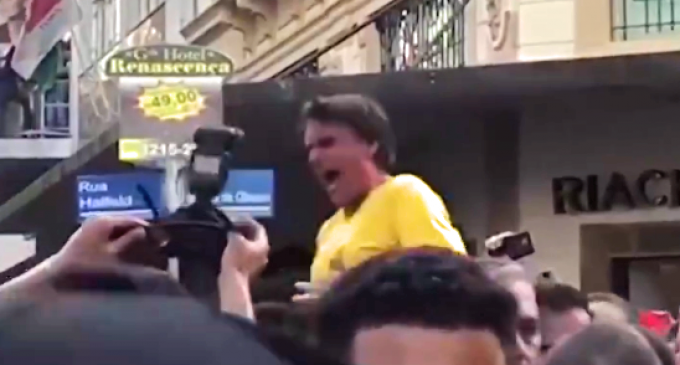 Presidential candidate Jair Bolsonaro, dubbed the “Brazilian Trump”, was stabbed by a left-wing terrorist during a campaign rally one month before Brazil’s election. Video footage shows the right-wing presidential candidate being stabbed in the abdomen by an assailant while passing through a large crowd of supporters.

40-year-old Adelio Bispo de Oliveira was charged in connection with the attack. The suspect’s Facebook page featured posts lambasting Bolsonaro, according to police. Oliveira told authorities in an interview that he had been ordered by God to carry out the attack which left Bolsonaro with injuries to his liver, lung and intestines. The attacker managed to insert the knife just below Bolsonaro’s bulletproof vest.

“Unfortunately, it was more serious than we hoped,” son Flavio Bolsonaro tweeted. “The wound reached part of his liver, lung and intestine. He lost a lot of blood, reaching the hospital…almost dead…his condition now seems stable. Please pray!”

Move to the next page for details and video.